By charging a porphyrin ring, the researchers saw changes in bonding due to conjugation effects

The precise imaging of individual molecules has been taken to a new level, with a demonstration that electrons can be delivered to them one at a time and the resulting changes in molecular structure discerned in the images.1

The technique is reported by Leo Gross and colleagues at IBM’s research labs in Zürich, Switzerland. The findings are ‘impressive and convincing’, says Daniel Ebeling of the Justus Liebig University of Giessen in Germany, who was not involved in the research. He adds that the technique ‘can deliver fundamental information that goes far beyond merely improving the image resolution, and should allow us to increase our understanding of surface reaction processes’.

Gross’s team has previously shown that probing molecules adsorbed on surfaces with an atomic force microscope (AFM), to the tip of which a carbon monoxide (CO) molecule is attached, can supply images with incredibly high resolution. They have previously used the method to image single molecules undergoing chemical reactions and charge-transfer processes.

To image charged states, the researchers placed the molecules on an insulating surface, for which they used very thin films of sodium chloride deposited on copper. They cooled the system to 5K to suppress motions and vibrations of the molecules, and used a CO-terminated AFM tip to image various organic molecules under ultrahigh vacuum.

Gross and colleagues could transfer charge one electron at a time to individual molecules by applying a voltage to the tip. They measured how the force on the tip varied with voltage – a method called Kelvin probe force microscopy. Step-like jumps in the force as the voltage was varied indicated a change in charge state.

Among the molecules Gross’s team have charged is azobenzene, an organic molecule commonly used as a photomechanical molecular switch because it can be transformed between cis and trans isomers. They found that in the neutral trans state the two benzene rings at each end of the molecule are tilted out of the plane in the same direction, but adding an electron causes one ring to tilt the other way, introducing a twist. Calculations of the molecular structure using density functional theory (DFT) predict the same behaviour.

The researchers also charged molecules of pentacene: linear chains of five fused benzene rings. They could resolve the slight changes in bond lengths on different rings as a two-electron charge alters the bonding pattern, the various carbon-carbon bonds changing their bond orders – generally somewhere between single or double – in different locations. 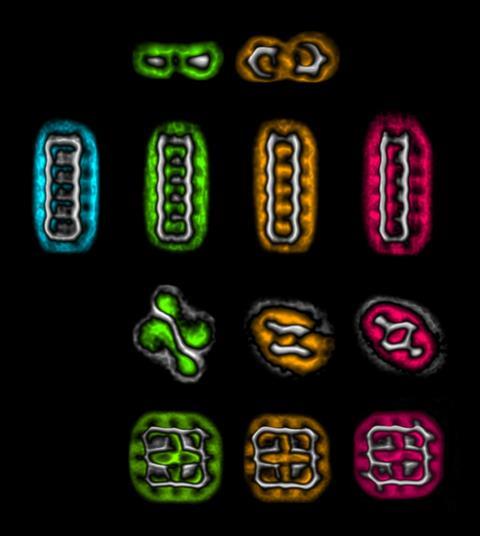 In the case of the tetracyanoquinodimethane (TCNQ) molecule, meanwhile – a strong electron acceptor often used in molecular electronics – charging the neutral molecule switched it from a conformation standing up on the surface to one lying flat, as well as altering the bonding within the molecule. This switch in orientation as a function of charge state hasn’t been seen before, and Gross says the effect ‘could be useful as a molecular switch in a device based on single-electron hopping’.

By charging a porphyrin ring – the key molecular group in chlorophyll, where light absorption causes charge transfer – the IBM team saw changes in bonding due to conjugation effects, which again agreed with DFT calculations. Such agreement is reassuring, but it doesn’t make the experiments redundant. DFT relies on various assumptions and approximations, and so although ‘often it is correct, we cannot rely on it’, says Gross. IBM team member Nikolaj Moll, a specialist on such calculations, says that ‘comparison of experiments with DFT results can help find the theory’s limitations and improve it’.

The ability to analyse bond order in these experiments on charged molecules is impressive, says Yoshiaki Sugimoto of the University of Tokyo in Japan, a specialist in molecular imaging. ‘The combination of charge-state control and sub-molecular resolution imaging opens the way for precise characterisation of charged molecules,’ he says.

Gross says that the technique could also help in synthesising new molecules and molecular devices by atom manipulation. His team has used the AFM method previously to make a molecule that is hard to synthesise by traditional means, and recently they demonstrated that, by creating multiply-charged states of molecules, they could form and break bonds.2 ‘Identifying radical sites like those of pentacene, and resolving structural changes on charging, will help us to better understand and predict such novel synthesis routes,’ he says.