Researchers in Germany and the Czech Republic have improved the clarity of atomic force microscopy (AFM) to probe the distribution of charges within atoms and molecules. The new ability could help in the design of solar cells, by unmasking the generation of charge carriers and how they hop to and from electrodes.

Normal AFM relies on the dynamics of a tiny oscillating cantilever, which is scanned over a surface under study. By monitoring the resonant frequency of the cantilever, a scientist can determine, with nanometer resolution, the shape and makeup of any surface features.

A variant of AFM is Kelvin probe force spectroscopy (KPFS), in which the cantilever’s tip applies a bias voltage to a surface. By varying the voltage, a researcher can measure that surface’s local work function – that is, the strength with which the surface holds on to electrons. KPFS might also be precise enough to map the distribution of charges within molecules, but this would require the cantilever tip to be brought very close to a sample where the influence of other chemical forces is uncertain.

Now Jascha Repp’s group at the University of Regensburg, together with colleagues at the Institute of Physics of the Czech Academy of Sciences, has determined exactly what these influences are, and how to overcome them. They studied two molecules that exhibited various charge distributions within chemical bonds, trimeric perfluoro-ortho-phenylene mercury (F12C18Hg3) and its hydrogen-terminated counterpart (H12C18Hg3). As the researchers performed KPFS closer and closer to the molecules, they found that the apparent charge distribution in the bonds was distorted by chemical attractions between certain atoms and the cantilever tip. 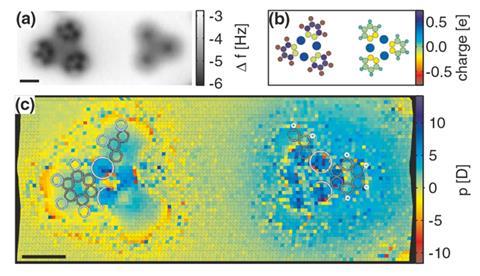 AFM was used to produce a charge distribution map, revealing the polarity of bonds

The way around this, the team found, is to measure the force on the cantilever as a function of proximity for two different bias voltages. That way, it was possible to cancel out any unwanted contributions from chemical forces.

Physicist Leo Gross, who develops AFM and other types of microscopy at the IBM Research Laboratory in Zurich, Switzerland, calls the result a ‘great achievement’. ‘Probably this technique will be applied and further refined in the future,’ he says.

Repp believes one of the first applications of the refined KPFS could be organic solar cells. ‘Relatively little is known about some things, like where exactly the charges are generated, or how they hop from one molecule to another or to the electrodes,’ he says. ‘There, [our technique] could really help to watch charges on very local scales.’