Complexes of Ca, Sr and Ba adopt a transition metal-like 18-electron configuration, rather than the octet more usually found in main group compounds

The heavier group 2 elements appear to involve their empty d-orbitals more in bonding than previously suspected. Calcium, strontium and barium can all form 18-electron octacarbonyl complexes with carbon monoxide, more akin to those formed by transition metals than other main group elements. The new results challenge previous notions of coordination chemistry and expand the limits of a widely accepted rule.

Elements are classified into main group elements, which include the s- and p-blocks of the periodic table, transition metals (d-block) and lanthanides and actinides (f-block). As main group elements, Ca, Sr and Ba normally form bonds using their s and p valence orbitals, following the ‘octet rule’, which states that atoms tend to combine in such a way that they have eight electrons in their valence shell. Transition metals bring in a further five d orbitals that must be filled to achieve such a stable configuration, resulting in a similar 18-electron rule for these elements. 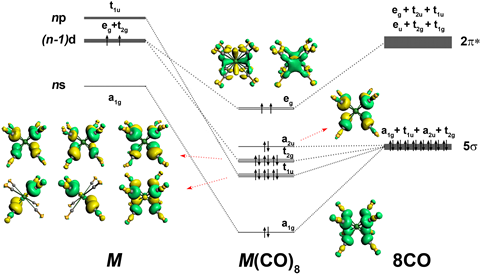 Ca, Sr and Ba use their filled d-orbitals to back-bond with carbonyl ligands, allowing them to form cubic M(CO)8 complexes with 18 electrons in their valence shells - two of which are unpaired

Gernot Frenking form the University of Marburg, Germany, and colleagues in China have now demonstrated that the 18-electron principle is not limited to transition metals. ’The observation of the alkaline earth complexes M(CO)8 indicates that the century-old octet rule for main group elements, which is taught in all chemistry textbooks, is not valid for some atoms,’ Frenking says. In a recent collaboration with Mingfei Zhou of Fudan University, he analysed the vibrational spectra of Ba(CO)+ and Ba(CO)– and was puzzled by the results.2 ‘The signal for the C–O stretching mode of the cation caught my attention because it was shifted to much lower wavenumbers with respect to free CO,’ Frenking says. ‘I have been working on such systems for 20 years and immediately recognised that something strange was going on.’ A theoretical analysis confirmed his assumption that the Ba atom was using d orbitals – instead of s or p orbitals – in the bond. Similar behaviour had been reported for Ba before, but only in exotic systems.3

The researchers then generated complexes of Ca, Sr and Ba with CO in a cold neon matrix and analysed the system using infrared spectroscopy. They detected complexes with the eight CO ligands arranged at the corners of a cube around the metal centre. The stretching frequencies of the CO bonds confirmed that there was back-bonding between the metals and the CO ligands. ‘CO forms its main bond with metals by donating its two outermost electrons to the metal (called σ-donation),’ explains Peter Armentrout from the University of Utah, US. ‘But metals can back-bond by donating metal electrons into the unoccupied antibonding orbitals on CO. This weakens the CO bond, which can be detected spectroscopically.’ Armentrout points out that the complexes also each have two unpaired electrons. ’This makes them like O2, and is one of the reasons these molecules are reactive,’ he says.