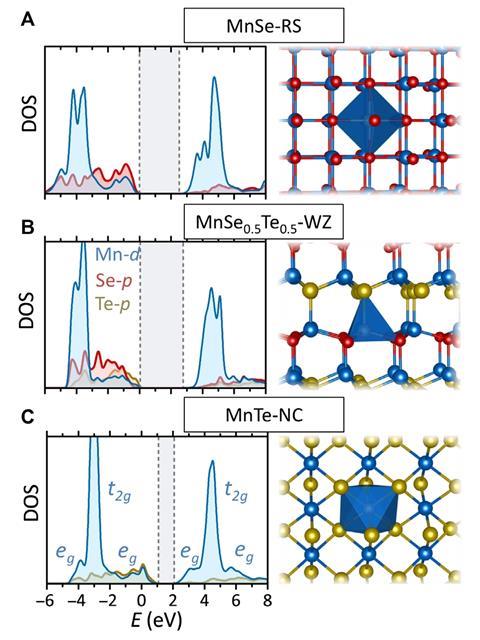 Theoretical electronic and crystal structures of the Mn(Se,Te) materials

A central feature of physical chemistry is materials’ tendency to adopt different structures at different pressures – including negative ones. But the idea of using negative pressure to reshape a material sounds experimentally impossible. But US researchers have developed a technique to drive alloys into structures that, in a pure material, would be stable only at negative pressures. The technique could allow the synthesis of a variety of new, potentially-useful materials previously thought almost inaccessible.

The driving force behind the counter-intuitive technique, developed at the National Renewable Energy Laboratory (NREL) and partner institutes, is the energetic cost of combining materials with different preferred structures. For the two materials to form a single crystal structure, at least one must adopt a structure that is not its lowest energy. In mixtures containing only a small amount of one material, the dominant material dictates the structure.

When the mixture is more equal, however, the lowest energy structure can, curiously, become the structure of neither constituent material. Instead, a third, lower-density structure can win out. The reason is that, as the atoms move further apart, the interaction between them becomes weaker and the energetic cost of forcing them out of their preferred structural configuration shrinks. ‘We found an alternative way to stabilise structures that otherwise would have required negative pressure,’ explains Sebastian Siol, now at Empa – the Swiss Federal Laboratories for Materials Science and Technology.

To demonstrate their technique, the researchers predicted a previously-unreported low density phase of an alloy of manganese(II) selenide and manganese(II) telluride. They synthesised the alloy, with varying proportions of the two component materials, using reactive magnetron sputtering. This involved electrically accelerating argon ions into separate targets made from each component material, before accelerating the displaced atoms into a borosilicate substrate. The resulting material demonstrated some intriguing, potentially-useful properties such as piezoelectricity – the ability to generate an electric charge in response to mechanical stress – that were present in neither parent compound. The researchers now plan to investigate what other new materials they can synthesise in this way. ‘I think mixing other II-VI or III-V group semiconductors would be a good place to investigate,’ says NREL’s Andriy Zakutayev. ‘We are looking at such theoretical predictions; it is an ongoing work.’

Theoretical chemist Artem Oganov of Skoltech in Russia is impressed: ‘What [the paper] reports makes sense and actually can be described as expected,’ he says. ‘But I think now people are talking about it as a practical recipe for making useful materials. If you find a new polymorph of a semiconductor, it’s highly likely that you will find different electronic mobilities, effective masses etc. Basically, this broadens the palette of materials that people can now use. It’s not completely novel, but it is extremely useful.’