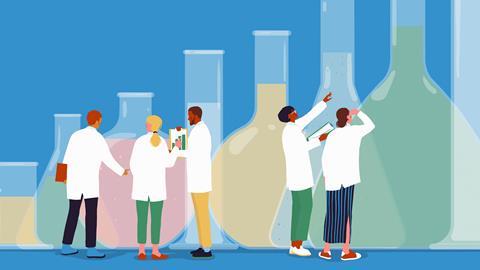 The American Chemical Society’s (ACS) first-ever diversity report on its authors, reviewers, editors and editorial advisory board (EAB) members shows some significant but not unexpected disparities. The organisation said it will use this benchmark data to implement changes that can address systemic issues in peer review, editor selection, accessibility and other factors affecting diversity in scientific publishing.

The ACS undertook a demographic survey last year that informed the new report and found that men make up the majority of these categories, often by at least two-to-one. ‘The imbalance between the number of men and women in each stakeholder group is present at every stage of the publishing process for ACS publications journals,’ the report concludes. ‘Among all the authors, men have far greater representation than women or non-binary persons, in line with global trends on gender disparity in chemistry.’

The ACS survey also found that the demographics of reviewers closely mirror those of corresponding authors – 73% of them are men, 25% are women, and 1% are non-binary persons.

However, significantly more women sit on the editorial boards and EABs of ACS publications. It turns out that 34% of editors at ACS journals and 40% of EAB members are women, compared with roughly a quarter of corresponding authors and reviewers. Non-binary persons make up less than 1% of both groups.

When it comes to the ethnicity of ACS reviewers, 46% identify as white and 30% as east Asian. South Asian and Latino or Hispanic are the only other groups that comprise more than 5% of the reviewers who completed reviews. Similarly, 55% of ACS journals editors are white, while its EABs are 56% white. People who identify as east Asian made up 27% of the editors and 26% of EAB membership. No other racial or ethnic group comprises more than 5% of either the editors or the EABs.

In terms of regional representation, 48% of ACS publication editors and 44% of the organisation’s EAB members hail from the US and Canada. Meanwhile, east Asia and the Pacific contribute 22% of each, while Europe and central Asia make up 21% of ACS’s editors and 23% of its EAB members.

Back in December 2020, the Royal Society of Chemistry (RSC) gathered and reported its diversity data, with some similar findings to those of the ACS. That analysis showed women represent about 30% of authors in RSC journals, nearly 30% of corresponding authors and 41% of first authors.

Further, after review RSC journals accepted for publication approximately one-quarter of manuscripts where women were the corresponding author, and the figure was almost 39% for those papers that had a female first author.

The RSC report also examined the membership of its journal editorial boards, finding that 57% of those who sat on these panels were male and 43% were female. The ethnicity breakdown revealed 71% were white and 28% were Asian.

Unlike its ACS counterpart, the RSC’s analysis included participation information broken down by sexual orientation, and also examined diversity among its prize, award and grant recipients.