Ancient protein moonlights in the eye

A structural protein in the mouse eye lens is the evolutionary descendant of an ancient bacterial enzyme, researchers have found - suggesting that ’moonlighting’ saved the protein from oblivion when its original role was taken over by a different family of enzymes.

Graeme Wistow and colleagues at the National Eye Institute in Bethesda, Maryland, US, together with Elena Orlova and colleagues at Birkbeck College London, UK, investigated the protein lengsin (for lens glutamine-synthetase-like protein), found in the eyes of mice and other vertebrate species.

The researchers’ genetic and structural results suggested that lengsin had a long and chequered past. Reconstruction of family trees from amino acid sequences revealed the vertebrate lens protein to be a member of the bacterial family of glutamine synthetase proteins, known as GS I. And lengsin’s structure - a symmetrical complex of 12 subunits - is unlike vertebrate glutamine synthetases, but like the ancient bacterial version of the enzyme.

Although lengsin was the first non-bacterial member of GS I to be discovered, a subsequent search of the sea urchin genome revealed several candidate genes for similar proteins. As the sea urchin, an invertebrate, has no eyes, it wasn’t known where the corresponding proteins were expressed, or what they were used for.

Wistow and colleagues found that the lengsin from a mouse eye lens had no enzymatic activity related to its ancestral glutamine synthetase function; not surprising, since many of the amino acid residues considered crucial for glutamine synthetase are mutated in vertebrate lengsins. Instead, the researchers suggest, lengsin plays a structural role in the eye lens. 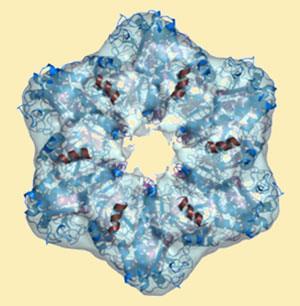 Model of the lengsin protein

There are previous examples of enzyme proteins being used for different functions in the eye lens, as Wistow explains: ’We are used to the idea of enzymes, such as lactate dehydrogenase, being recruited to serve new roles in the vertebrate eye lens. It’s like taking a screwdriver and using it to open and stir tins of paint. It’s not what it was designed for but it works.’

But lengsin’s age adds a new twist to this evolutionary tale. ’A big surprise in this story was the realisation that lengsin is very old and indeed comes from a family of enzymes that was known only in prokaryotes,’ Wistow told Chemistry World.

’It seems that enzymes of this family were actually expressed in very ancient ancestors of vertebrates but were lost during evolution. One member survived in vertebrate genomes because it acquired a different, specialised role in the lens, losing its ancestral catalytic role in the process,’ he added.

Nicolette Lubsen from Radboud University at Nijmegen, Netherlands, welcomed the new results: ’The finding of an ancient protein, lengsin, in the lens also confirms that the lens, although a vertebrate innovation, evolved from a structure that predates vertebrate evolution,’ she told Chemistry World. ’It is intriguing that a tissue whose evolution has puzzled evolutionary biologists for a long time does teach us much about the evolution of genes.’