Anti-electrostatic halogen bonding shown in solution for the first time

An international team of scientists has identified a series of halogen-bonded complexes formed by two anions that are stable in solution. Spontaneous formation of this counterintuitive interaction shows that halogen bonding is strong enough to overcome electrostatic repulsion between two anions. 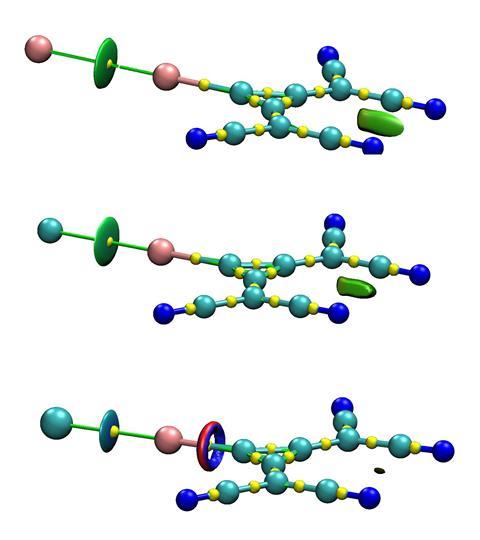 Halogen bonding is an attractive interaction that forms between an electron-rich nucleophilic species (XB acceptor) and the electrophilic region of a molecule containing a halogen substituent (XB donor). Such interactions normally involve either cationic or neutral donors, while interactions between anionic halogen species and electron-rich acceptors, especially anionic acceptors, are considered electrostatically repulsive.

‘In introductory science courses, we are taught that when it comes to interactions between charged particles, opposites attract – this is known as Coulomb’s law,’ explains Mark Taylor, an organic and supramolecular chemist from the University of Toronto in Canada, who was not involved in the research. As such, ‘an attractive interaction between two negatively charged ions in solution [would be] surprising in light of Coulomb’s law.’

However, a team lead by Sergiy Rosokha at Ball State University, US, and Stefan Huber at Ruhr-University Bochum, Germany, has shown that halogen bonding between multiple anionic species is possible. ‘Halogen bonding is a fundamental non-covalent interaction similar to hydrogen bonding that has been little explored so far,’ explains Huber. ‘We noticed some anomalies with the currently fashionable σ-hole model of halogen bonding, in particular some trends that it could not explain, and started to look at unusual cases.’

Rosokha says anti-electrostatic bonding is possible due to a combination of factors. ‘First, polar solvents attenuate original anion–anion repulsion and allow [for the] close approach of the counter-parts. This leads to their polarisation, which further decreases repulsion, and can even create an area of positive charge – and therefore a source of attraction – on the surface of the highly-polarisable iodine substituents. Finally, at closer distances, the stability of such complexes is supported by molecular orbital interactions akin to that leading to the formation of covalent bonds.’

To characterise this anti-electrostatic bonding between two anions, the team focused on the interaction between halides and 1,2-bis(dicyanomethylene)-3-iodo-cyclopropanide, a compound with a universally negative electrostatic potential across its entire surface. While the interaction had already been studied in the solid state,2 exploring its behaviour in solution, where it is ‘not affected by crystal forces and counter-ion interference is minimal’, meant treading new ground.

Mixing this cyclopropenylium-based anionic donor with halides in polar and moderately-polar solvents saw new bands appear in the UV-vis spectra, despite the thermodynamic similarities shared with corresponding interactions that use neutral XB donors.

‘Variation of this additional absorption with the concentration of the reagents, comparisons with spectral changes observed in related compounds, and computational analysis proved that the UV-vis spectral changes … are related to the formation of halogen-bonded complexes,’ explains Rosokha. The team demonstrated that these new absorption bands were independent of the halide used and were affected by the differences in the molecular orbital energies of the two bonding species.

‘Identification of such anti-electrostatic halogen-bonded complexes further supports an idea that there is more to halogen bonding than electrostatic attraction between two isolated species. Instead, this bonding provides a channel for movement of electrons between them,’ adds Rosokha.

‘I would be curious to find out more about the actual bonding mechanism and the actual physics behind the stabilising interaction,’ says Matthias Bickelhaupt, who develops chemical theories and methods for rationally designing molecules and chemical processes at VU Amsterdam in the Netherlands. ‘There can be no doubt about the conclusion that orbital interactions play a crucial role in anti-electrostatic halogen-bonded complexes, but it would still be wonderful to confirm the occurrence of HOMO–LUMO orbital interactions explicitly, for example, with quantitative molecular orbital theory.’

For the team, the next step in understanding anti-electrostatic interactions is uncovering other systems that might be able to form such complexes, in the hope that such unusual halogen bond formations might have synthetic or biological applications.

‘In the longer term, it would be useful to devise systems that display higher association constants with anions and that function in a broad range of solvents,’ adds Taylor, who notes that a number of anion–anion interactions take place in aqueous solution, and that halogen bonding has applications in anion recognition in water. ‘It may ultimately be possible to use halogen bonding between anions to achieve selective molecular recognition in aqueous, salt-rich solutions.’