US researchers have made a step towards understanding why some natural clays are antibacterial, boosting the chances that they could one day be used as alternatives to antibiotic drugs. According to the researchers, the clays supply iron that kills bacteria by generating radicals that attack cell components.

People have used clays throughout history for healing. More recently, patients in Ivory Coast suffering from a flesh-eating disease known as Buruli ulcer were treated with French green clays. The clays appeared to ease the swelling of the lesions like an antibiotic, but no-one knew how they did it.

Lynda Williams and colleagues at Arizona State University in Tempe came to this mystery in 2002. They found that in fact just one of the French clays was antibacterial, and that even then the clay’s antibacterial properties were not consistent from batch to batch. ’Because of this we have been studying what makes a natural clay antibacterial,’ says Williams. 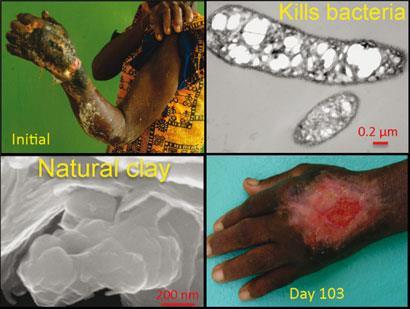 Buruli ulcer, a flesh-eating bacterial infection, can be treated with certain iron-rich clays. The iron infiltrates the cells and generates lethal radicals

Williams and colleagues have now made a crucial step in that direction. They have analysed clay supplied by an open-pit mine in the volcanic Cascade mountains in Oregon, US, which is the most effective antibacterial clay the researchers have come across. Using x-ray spectroscopy and inductively coupled plasma mass spectrometry, the researchers studied the clay’s mineralogy, its composition, and the chemistry of both the clay and nearby E. coli bacteria in water.

’I think the results should contribute to the understanding of antimicrobial behaviour of nanoparticles,’ says Yulong Ding, a bioengineer at the University of Leeds who studies naturally antibacterial nanoparticles. However, Ding adds that scientists should probably interpret the finding ’as one of several possible mechanisms.’