Team makes rare diamond only ever found before in meteorite craters 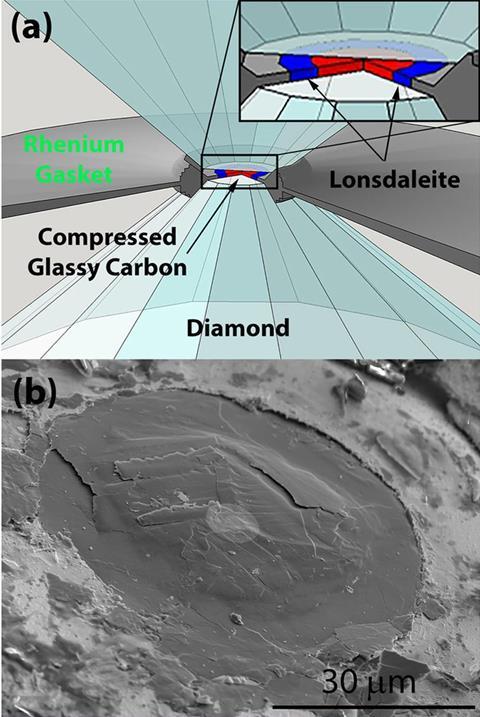 The graphical representation (top image) shows the formation of lonsdaleite in the diamond anvil. The bottom image is a scanning electron microscope image of the hexagonal diamond

Scientists in Australia have made a rare form of hexagonal diamond called lonsdaleite. The material may be harder than diamond itself.

One of the hardest and most sought after materials on Earth, diamond is found in a range of products from jewellery to industrial cutting blades. But other forms of the carbon crystal structure are harder to come by. Lonsdaleite is one such mineral and has a hexagonal arrangement of carbon atoms – only ever found to date in meteorite impact craters such as the Canyon Diablo crater in the US.

It is possible to make lonsdaleite in the lab, but only at a very high temperatures in excess of 800°C. Now, Thomas Shiell from the Australian National University and his colleagues have synthesised lonsdaleite at much lower temperatures using a diamond anvil cell (DAC).

Compressing glassy carbon in the DAC and heating it to 400°C, the team made the rare phase at 100GPa. Pure lonsdaleite forms when graphene sheets within the glassy precursor stack under high pressure. The group argues their experiment proves that a sharp shock compression from a meteor impact is not needed to produce hexagonal diamond.