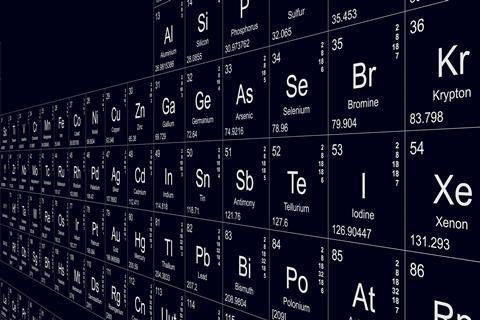 Large sections of the book appear to have been lifted directly, or lightly paraphrased, from Wikipedia

Elsevier has retracted a whole book about the periodic table after it came to light that significant portions appear to be plagiarised from Wikipedia. Published and retracted last year, The Periodic Table: Nature’s Building Blocks: An Introduction to the Naturally Occurring Elements, Their Origins and Their Uses, addresses minerals and their elements and covers the history of the periodic table.

The book’s downfall began on 26 December 2020 when Thomas Rauchfuss, an inorganic chemistry professor at the University of Illinois in Urbana-Champaign, US, and occasional editor at Wikipedia, received a message from a Finnish Wikipedia editor through the site’s inter-editor messaging service, asking for his help as a chemist.

‘I was reading Wiki articles about the chlorides of molybdenum and then came across this book,’ the note said. The Finnish editor said that the text seemed ‘oddly familiar’ and it turns out that at least the material about molybdenum(ii) chloride and molybdenum(iii) chloride is either a ‘direct copy from Wikipedia or with slight tweaks’. He provided Rauchfuss with the copied version, as well as the offending book pages, and asked whether the publisher, Elsevier, should be contacted.

‘I rapidly checked the book and it was loaded with stuff from Wikipedia,’ Rauchfuss recalls. ‘I agreed that there was pretty serious plagiarism.’ He immediately contacted Kloprogge, and sent him text from the book highlighting what had been either directly copied or very closely paraphrased from Wikipedia.

‘He basically blew me off,’ Rauchfuss recalls. Kloprogge responded that he is not a chemist but a geologist and mineralogist, and was ‘not aware’ of any such concerns. Kloprogge added that he had rechecked an entire chapter with the plagiarism detection software Ithenticate and nothing was recognised as matching with Wikipedia.

Elsevier, we’ve had a problem here

Unsatisfied, Rauchfuss next reached out to the book’s junior author, Concepcion Ponce, an assistant chemistry professor at the University of the Philippines Visayas. ‘I sent him these large sections with highlights showing copied or paraphrased text and they just ignored it all,’ Rauchfuss says. The book’s third author, Thomas Loomis from South Dakota, US, said he knew nothing about the situation and had only supplied photographs for the book.

When Rauchfuss ultimately contacted Elsevier, the publisher responded immediately. ‘They more or less got right back to me and said, “Yes, there is a problem,”’ he says. Elsevier promptly retracted the book online.

While Rauchfuss is impressed with Elsevier’s response, he is surprised that the publisher doesn’t appear to have performed any substantial plagiarism check prior to publishing the book. ‘There exists software that contains an algorithm to check a few words in a series to see if they match another text,’ Rauchfuss notes. ‘The surprising thing is that they apparently didn’t do that.’

Kloprogge did not respond to Chemistry World’s request for comment, but he told Retraction Watch that the story is ‘too painful’ to recount. He also said that he and the book’s other two authors agreed with the retraction, but they might publish an updated version in the future.

‘We suspect that lots of Wikipedia content is showing up in student essays, and I have seen Wikipedia content in scientific presentations, oftentimes with attribution,’ Rauchfuss says. ‘But it is unusual that this would manifest itself in the form of this pretty high visibility book. [The authors] may have underestimated just now closely such work is examined by nerds who are watching,’ Rauchfuss adds. ‘The moral is that you want to have experts to write books.’