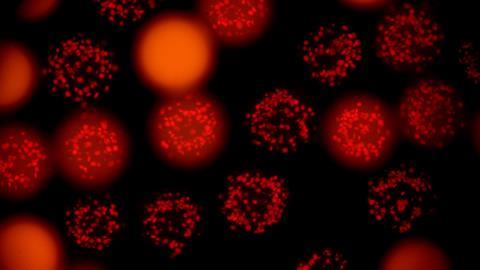 Researchers in Germany and France have created artificial chloroplasts that use light to drive carbon dioxide fixation via a pathway not found in nature. The approach could be used to capture carbon dioxide from the environment and turn it into useful molecules such as fuels and drugs.

Engineering materials and enzymes that use sunlight to mimic individual photosynthetic processes - such as water-splitting and carbon dioxide fixation – is nothing new. However, recreating the complexity and efficiency of plant cells’ chloroplasts, which can both harvest light energy and then use it to carry out multi-step syntheses, has presented a much bigger challenge.

In 2016, Tobias Erb’s lab at the Max Planck Institute for Terrestrial Biology in Marburg, Germany, developed an artificial carbon fixation pathway. Dubbed Cetch (crotonylCoA/ethylmalonyl-CoA/hydroxybutyryl-CoA), the cycle uses a cascade of natural and engineered enzymes to convert carbon dioxide into organic molecules, and is even more efficient than the carbon fixation cycle in plants.1 Now, together with Jean-Christophe Baret’s group at the University of Bordeaux, France, Erb’s team has used microfluidics to couple the Cetch cycle to the chloroplast’s light-harvesting energy source, producing cell-sized droplets that act as synthetic chloroplasts.2

Each cell-sized droplet acts as a synthetic chloroplast. The thylakoid membranes visible in the microscope images (top row) use light to produce NADPH (bottom row) and ATP, which power the enzyme reaction cascade that fixes carbon dioxide.

‘Our work shows for the first time that you can realise alternative, autonomous photosynthetic systems at the micro-scale from individual parts and modules, allowing us to construct “alternative” biological solutions, which nature has not explored,’ Erb says. ‘To our knowledge, it is the first demonstration of continuous, multi-step conversion of carbon dioxide into carbon compounds.’

While the Cetch enzymes carry out the CO2 reduction chemistry, the energy source for the reactions is borrowed from spinach plants. The researchers isolated thylakoid membranes – the structures that convert light into energy-rich compounds, including adenosine triphosphate – from spinach chloroplasts. The team then used microfluidics to encapsulate these membranes together with the Cetch enzymes in water-in-oil microdroplets. Each cell-sized drop was able to carry out all the necessary reactions to convert CO2 into glycolate, powered just by light 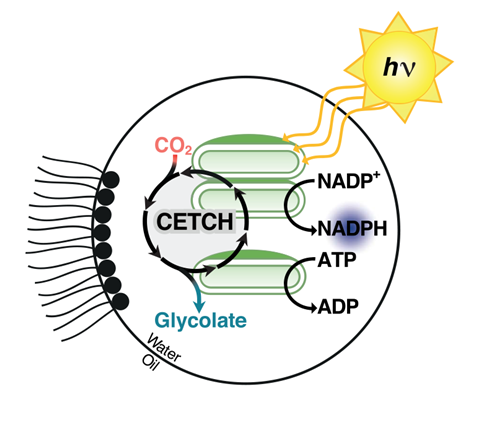 The Cetch enzyme cascade reduces carbon dioxide to glycolate, all powered by the light-harvesting energy source of the thylakoid membrane

‘Encapsulation allows us to produce hundreds to thousands of cell-sized compartments that can operate independently from each other,’ explains Erb. ‘This opens the way for the standardised mass production of catalytically active micro-reaction compartments - or “artificial cells” - for different biotechnological applications in the future.’

Although Cetch has previously been shown to be more efficient than natural photosynthesis, it fell short when integrated into the artificial chloroplasts. Erb says further optimisation should improve that.

‘The encapsulation of chloroplast membranes in tiny droplets to drive carbon dioxide incorporation is a truly dramatic advance,’ comments Hagan Bayley who investigates synthetic biology at the University of Oxford, UK. ‘However, scale-up in a cost effective manner, for example for the synthesis of high-value pharmaceuticals, may require transplantation of entire in-vitro systems into workhorse cells, an appreciable challenge recognised by the authors.’