Evolving over billions of years, enzymes are the ultimate catalysts necessary for life. While artificial versions have been investigated for several decades, matching their catalytic performance to nature’s enzymes has remained challenging. Nanomaterials with enzyme-like characteristics – dubbed nanozymes – which are more stable, cheaper and easier to store than natural enzymes, have shown potential for biomedical and biosensing applications. However, their catalytic activity has remained limited. 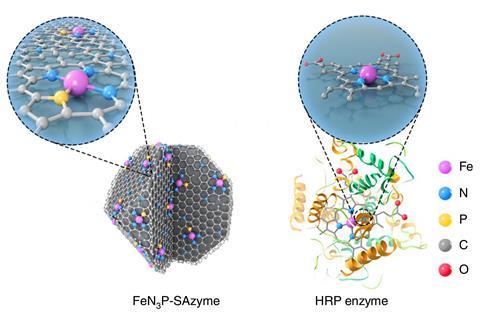 The nanozyme (left) and the natural horseradish peroxidase (right)

Now, a team led by Yadong Li at Tsinghua University, Beijing, has developed a nanozyme whose electronic and geometric structure mimics the natural enzyme horseradish peroxidase but surpasses its catalytic efficiency. ‘More importantly, we demonstrate that the catalytic performance can be modulated via local structure control of active sites and their coordination environment,’ explains team member Dingsheng Wang.

Most natural enzymes are proteins that comprise a unique three-dimensional amino acid structure. Some, however, evolved to contain a metal ionwhich acts as the catalytic active site a where substrate binding occurs. In peroxidases, the metal is usually iron. Peroxidases are found in a wide variety of organisms, including plants, humans and bacteria and are one of the most studied enzymes with various applications such as diagnostic assays and removing toxic phenols from industrial wastewater. Their main function is to catalyse redox reactions by oxidising electron donor substrates that turn hydrogen peroxide into water and oxygen.

To replicate this in a nanozyme, the researchers engineered at the atomic scale a zeolite framework comprising carbon and nitrogen that mimics the natural amino acid structure. Phosphorus was then added to the mixture , because the element often plays a key role in enzyme activity, acting as an anchor for the metal active site and transporting electrons to it from the substrate. Iron was then introduced before a pyrolysis step which formed the final nanozyme powder. Analyses showed that iron, nitrogen and phosphorus atoms formed individual clusters that were spread evenly throughout the carbon lattice.

Tests of peroxidase activity using a tetramethylbenzidine substrate showed that the nanozyme was 12 times more efficient than horseradish peroxidase under the same reaction conditions, more than any other artificial enzyme has achieved to date when compared with its natural counterpart.

Following experiments revealing that the nanozyme’s superior peroxidase activity can induce rapid oxidative death of tumour cells, the team tested it in living mice. When the nanozyme was injected into tumours, 14 days later they were less than half the size of tumours in untreated controls and no toxic effects were found.

‘Nature uses exquisite control over metal ligation to provide highly efficient catalysts. This structural control is elegantly modelled here in single-metal catalysts,’ comments Vince Rotello who investigates artificial enzymes at the University of Massachusetts, US. ‘The single-atom strategy presented is a promising direction for the creation of nanocatalysts for biological, environmental and chemical applications.’