Researchers have made a proton pump using shape-shifting spiropyrans

Photosensitive compounds built into an artificial membrane can capture light energy in the same way as proton pumps found in biological cells. Scientists in Switzerland say their system could open up new approaches to solar power generation and artificial photosynthesis.

In cells, proton pumps are transporter proteins that ferry hydrogen ions across a membrane. This creates a proton gradient where the pH and charge differ significantly on either side of the membrane, which acts as a store of electrochemical energy.

A team led by Eric Bakker at the University of Geneva has created a proton pump using a photochromic spiropyran compound, which switches between different forms in response to light. When exposed to UV light, the spiropyran ring opens to form a merocyanine – a fluorescent dye that takes up protons. When this is illuminated with light from the visible spectrum, it releases the protons and reverts to the spiropyran form.

Bakker’s group built a supported liquid membrane doped with spiropyran molecules, and immersed it in hydrochloric acid. They illuminated one side with UV light and the other with visible light. The spiropyran converts to merocyanine on the UV side of the membrane, where it picks up protons from the solution. It then diffuses across to the visible light side and releases the protons. This builds up enough of a proton gradient to generate a small current. Switching the UV and visible light sources to opposite sides of the membrane creates an alternating current. 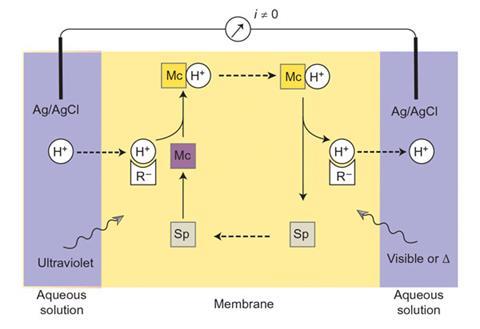 Protons are transported across the membrane from left to right

The power output is small – just 210mV – with a 0.12% efficiency, but this is a vast improvement on previous efforts. Until now, the best artificial light-harvesting membranes had to be illuminated for hours to reach 100mV. This one reaches peak output in just a few minutes.

‘A proton pump based on a spiropyran has never been reported before,’ Bakker says. ‘We hope the principles we have established will lead to new approaches to utilising solar energy.’ He acknowledges there is room for improvement – the membrane is currently not very photostable, which limits the power output.

Steve Dunn – who works on light harvesting materials at Queen Mary, University of London, UK – says that, while the work is interesting, it doesn’t have any immediate applications. But he adds that a more robust version could be useful for moving protons around and controlling pH within light harvesting devices that contain pH-sensitive semiconductors or nanoparticles. ‘If you can solve problems with the membrane stability, you can overcome the problem of the very low power density,’ he says. ‘Then it could have all sorts of implications for light harvesting in the broader sense.’