Capturing carbon dioxide from the air will be much more expensive than previously thought, researchers report

Capturing carbon dioxide from the air to mitigate climate change is likely to be too expensive to be practical, a new study suggests. The study, which has examined the thermodynamics of different carbon-capture methods, implies that removing a tonne of CO2 from the atmosphere will cost in the region of $1000 (?640).

Carbon capture is one of the most popular ideas to combat climate change. The process can either be performed at large ’point sources’ like fossil-fuel power plants, which emit high concentrations of CO2, or indeed anywhere to reduce atmospheric CO2 levels. Once the CO2 is captured, it must be purified and stored so it can no longer have an effect on the climate. 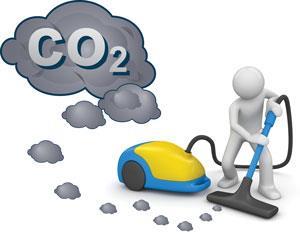 Capturing carbon dioxide from the air could cost ?640 per tonne, while permits to emit a tonne of the gas in Europe are selling for around ?8

But according to engineer Kurt House of the Massachusetts Institute of Technology (MIT) in Cambridge, US, and colleagues, carbon capture from the air is never going to compete with capture from large point sources. They have analysed the energy requirements and costs of several carbon-capture methods, most of which involve chemical absorption. In this process, a solution selectively absorbs CO2 from a gas, and then - with additional heat - the reaction is reversed to generate a concentrated stream of CO2 for storage.

The maximum efficiency given by thermodynamics to capture CO2 is on the order of 20kJ/mole. However, the MIT group claims that given real-world efficiencies - particularly the very low concentration of CO2 in the atmosphere - it is likely to take more than 400kJ/mole, at a cost of roughly $1000/tonne. As a result, the researchers point out, the carbon-capture systems themselves would have to be powered by totally clean, ’carbon neutral’ power sources in order to provide a net CO2 reduction. ’We find that many [past] estimates in the literature appear to overestimate air capture’s potential,’ they say.

Hans-Joachim Ziock, an environmental scientist at Los Alamos National Laboratory in the US, disagrees with one point of the MIT group’s analysis - that the diffuse nature of CO2 will make capture less efficient. Unlike extracting minerals from the ground, where low concentrations make extraction much more energy-consuming, there should be no extra cost in moving or processing air to get at the CO2, he says. And even if the energy required is more than 400kJ/mole, he adds, ’there is no real problem. All that is required to avoid being carbon positive is that one not release more CO2 into the air than one is capturing. If the energy being used is non-fossil, there is no carbon release.’