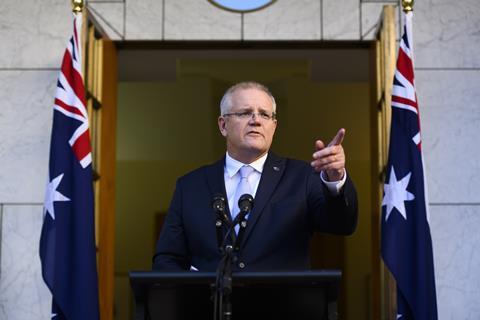 The Coalition government in Australia upset the odds to win a third term in office earlier this summer. Few researchers were happy. This government is almost unchanged from the last government, which was criticised for downgrading investment in basic research.

Research spending as a percentage of GDP in Australia is around 1.88%, below the 2.36% average across advanced economies. Universities Australia, which represents 39 universities, estimates that in 2019 government spending on R&D will fall to its lowest level in four decades.

A general trend for conservative Coalition governments led by the Liberal party – in power since 2013 – is to invest in health, while Labour tilts towards basic research, with many scientists seeing the conservatives as not particularly interested in science. As governments change there has been a see-saw in research priorities and a lack of coherence, critics charge. Arguably a bigger issue is that science is not viewed as a vote winner and suffers from benign neglect, no matter who has their hand on the tiller.

‘Research funding has been largely stagnant for a while in Australia now,’ says Gwil Croucher, a research policy expert at the University of Melbourne. It’s still higher than countries such as the UK and Canada though, that both invest around 1.6% of GDP in R&D.

The Coalition government has focused more on translation and commercialisation of research over the last five years, while squeezing fundamental research. ‘There has been a strong pivot to industry or industry-focused research,’ says Christopher Sumby, a chemist at the University of Adelaide. ‘This presents issues in an economy where industry doesn’t value research and innovation to the extent of other highly develop economies.’

The Australian Research Council (ARC) and the National Health and Medical Research Council, which oversee most competitive research grants, have seen declining or static levels of funding in recent years. ‘Funds have been diverted from the more open funding schemes in to strategy requests or held back by the federal government by not indexing the allocations,’ says Sumby. In May, Universities Australia expressed its concern to a forthcoming review of Australia’s science and research priorities about a shift away from basic research. It noted that 40% of research expenditure in 1992 was ‘pure basic research’, but this had fallen to 23% by 2016. ‘The ARC is chronically underfunded, but it is doing a fantastic amount of work with very little money,’ says Thomas Maschmeyer, a chemist at the University of Sydney.

The Australian government seems not to be backing its winners

Australian institutions still score highly internationally with its researchers writing 2.7% of the world’s scientific output with just 0.34% of the world’s population. A bright spot for the ARC is that its major grants are not ring-fenced by topic. ‘We can put in grant applications for completely fundamental work and they do get funded,’ says Chris Ling, a solid-state chemist, also at the University of Sydney.

A recent G20 scorecard described research output in Australia as scoring highly per researcher, with output having doubled. Its overall citation impact is still above the G20 average too. Australia had a clear focus on quality and this has pushed up the average impact of Australian research to compete with the UK and the US, says Jonathan Adams, director of the Institute for Scientific Information (ISI) and an author of the scorecard. Levels of international collaboration have gone up, ‘since the best in the world want to work with Australian researchers,’ which has driven growth. Adams says it is ‘concerning that the Australian government seems not to be backing its winners and that it has not sustained the science budget investment that has put the country in such a great position.’

Universities Australia calculates that for every A$100,000 (£56,000) an Australian university secures in competitive research grants, it must find another A$85,000 to deliver that research. ‘A rough estimate is that government funding only accounts for about half the full university expenditure on research,’ says Croucher. The shortfall is made up from university funds, some of which comes from philanthropic sources. This year the University of Sydney hit its A$1 billion fundraising target and the University of Melbourne also plans to raise A$1 billion by 2021. Most university research is currently supplemented by international student fees. Fees from students remain buoyant, as the robust reputation of Australian research continues to attract them, particularly from India and China.

Geopolitics has helped too. Australia may yet leapfrog the UK to become the second most popular destination for international students. The UK decision to include international students in immigration numbers was ‘good for us, not good for British universities, particularly in terms of Indian students’, says Margaret Sheil, a physical chemist and vice-chancellor of Queensland University of Technology, Brisbane. While chair of the ARC between 2007 and 2012, she saw funding rise from A$600 million to A$800 million.

Though the US remains the top destination for students, trade wars and anti-immigrant sentiment have harmed its appeal as well. Universities Australia says that international education generates exports of A$35 billion a year and supports more than 240,000 jobs across Australia, making it the nation’s third largest export.

The future of basic research, Croucher stresses, ‘is dependent on the country’s success as an international education destination of choice, which is not guaranteed, as China and other countries build large, high-quality domestic higher education systems’. Sheil argues that the scientific community must not sit on its hands. ‘Governments respond to the needs and demands of the community, and we don’t always articulate the value of what we do. We need to make a better case,’ she says.

As a proportion of ‘discretionary’ non-health and welfare government expenditure, research in Australian has been declining from around 5% to 3%, Croucher has calculated. This is well below the US figure, which consistently hit around 10% to 12% since the 1960s. While the Australian government claims to spend about A$10 billion on research each year, one-third of this is in controversial tax breaks, says Croucher. ‘The government spends a large proportion of its dollars set aside for science subsidising tax inducements for industry, trying to incentivise private industry to undertake research,’ he explains.

These incentives often go to businesses like banks and large mining companies, and many question this. The tax breaks are a good concept, says Maschmeyer, but he describes their actual implementation as ‘a shocker’. There are suspicions that large companies are playing the system. Moreover, collaboration between industry and universities remain poor. ‘We don’t have the kind of industries that necessarily collaborate with the universities,’ says Sheil. The country is also far from many multinational headquarters. ‘We are not in Switzerland with a pharmaceutical company next door,’ says Sheil. ‘To engage with international industry, we have to take the research further along the path.’

Punching above its weight

Australian scientists still succeed though. The country holds a stellar reputation in cancer research. The Walter and Eliza Hall Institute of Medical Research, Melbourne, led research that resulted in a potent new leukaemia drug, Venetoclax, for example, which was approved by the EU and US in 2016. The drug was developed and trialled in Australia, with the involvement of Genentech and AbbVie. Maschmeyer’s fundamental research has spun out two companies, one focused on recycling plastics (Licella) and another on zinc bromide batteries (Gelion).

The research opportunities are greatest in areas of applied research

While ARC funding languishes, the last few years has seen a cash infusion for the Medical Research Future Fund (MRFF), established in 2015 with the aim of building up a $20 billion endowment. ‘We are calling on this model to be replicated for the remainder of the research sector,’ comments Kylie Walker, chief executive of Science & Technology Australia (STA), which represents 70,000 scientists. ‘A translational research fund could supercharge the application of research and Australian commercialisation while providing freedom for the Australian Research Council to shift more of its funding to basic, foundation research.’

‘Australian funding bodies have evolved over time,’ says Croucher. ‘There is now probably less coherence in Australia than in places like the UK and the US.’ He says researchers worry about swings and roundabouts, feast then famine that undercuts hard won progress in skills and infrastructure. This has not been helped by recent political turmoil, with the country going through six prime ministers in just 12 years.

Australian scientists complain that blue skies research still remains undervalued. ‘The research opportunities are greatest in areas of applied research, usually in specialised areas or themes,’ says Sumby. ‘There is also good support for large consortia to do large fundamental research projects [in centres of excellence] or applied programmes.’ This resonates with the experience of Ling, who returned to Australia in 2014. Currently he has two grants, one for lithium–ion batteries and another for photocatalytic water splitting. ‘My research since I came back has been slowly becoming a bit more applied, and that is a response to what gets funded in grants,’ Ling explains. The ARC’s main fundamental research grants are usually for three years, and an investigator can hold only two at a time. With only one application round per year, even someone with a 100% success rate, would still be writing a new grant application two out of every three summers. ‘The grant writing roundabout basically never stops,’ says Ling.

However, Adams counters that the emphasis on socioeconomic impact, rather than academic impact, is standard in many countries. ‘Since 2018 there is less money available for everything, so research budgets are coming under scrutiny too,’ he says. The STA wants the government to reverse cuts in research block grants for universities and federal research funding grants to track inflation at least.

Australia is competing against countries that are increasing spending or have higher and more stable research spending, such as Singapore and now China, Maschmeyer says. ‘It is Australians’ ability to do things with a bucket and string, because we are a pioneering nation, that allows us to be successful still,’ he adds. ‘But at some stage that barrel has been scraped quite clean, and we will get a decline in performance. You cannot punch above your weight all the time.’ For now though, despite lacklustre government spending on basic research, Australian science continues to succeed, supplemented by cash from student fees and philanthropy.

‘It is not that people don’t know what the problems are,’ says Croucher. ‘It is about whether the government is willing to spend political capital on prioritising research funding. The scientific community must continue to explain to the public and politicians why it is important to invest in science.’ He points to the 2017 March for Science in the US and says ‘that is the sort of public campaign that might be necessary if it gets much worse’.