Hydroxyl radicals play a central role in cleaning pollutants from our atmosphere - but the ultimate source of Earth’s ’atmospheric brooms’ has proven difficult to track down. An international team of researchers have now found that the answer could lie not in the air above us, but in the ground beneath our feet.

Previous research has established that up to one third of the hydroxyl radicals formed in the lower atmosphere come from the photochemical breakdown of nitrous acid (HONO). But here the trail ran cold, the source of much of this HONO unknown. Yafang Cheng at Peking University in Beijing, China, Hang Su at the Max Planck Institute in Mainz, Germany, and their colleagues, have now shown that it can come from soil.

The team looked to the soil after previous research showed that the ground could act as a surface on which the chemical conversion of nitrite into HONO can take place. ’We thought that this reaction was not strong enough to explain the missing source - but that there might be some other process to release HONO from soil directly,’ says Cheng.

To test out their idea, the team placed soil samples inside a Teflon chamber, and flushed it with synthetic air, measuring HONO concentrations in the air by the chamber exit. They found that the soil was indeed releasing HONO - and at a rate high enough for soil to be the missing source of the gas in the atmosphere, the team concluded. 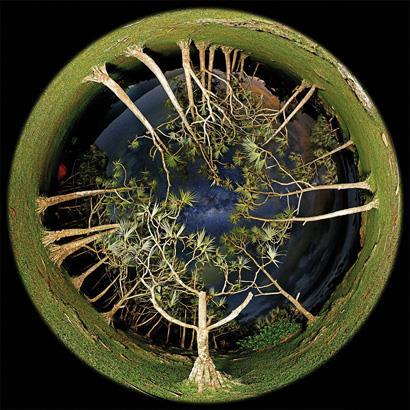 Soil bacteria produce chemicals that help to cleanse the atmosphere

Although it hadn’t been considered as a source of atmospheric HONO before, the basic chemistry taking place in the soil is well known. Soil microbes produce nitrite ions, which are known to react reversibly with protons to give aqueous nitrous acid. This can then partition into the gas phase and enter the atmosphere. The more acidic the soil, and the more heavily fertilised it is, the more HONO enters the atmosphere, the researchers say. However, alkaline soils and natural environments can also produce the gas.

Importantly, the process can also account for the characteristic diurnal fluctuation of HONO levels in the air, says Cheng. Models of atmospheric chemistry processes show that HONO production peaks at midday - a fact which tallies with the temperature dependence of the equilibrium processes involved in HONO emission from the soil.

Barbara Finlayson-Pitts, an atmospheric chemist who studies HONO formation at the University of California, Irvine, US, says the study is an interesting one that draws attention to a HONO source that hasn’t had a lot of attention in the past. ’If you’re over an agricultural area, I think this is going to be a significant HONO source,’ she says. ’But it probably isn’t going to explain all the HONO formation in the air - including in the middle of cities, for example.’

Cheng agrees that soil isn’t the only HONO source. ’We are confident that this soil emitted HONO can explain the missing source, but I think there are also other reactions in the atmosphere that also contribute to the HONO,’ she says.

’We plan to do more experimental work in the lab to see more fundamentally how the soil is releasing HONO,’ Cheng adds. ’We also plan to do some global modelling to understand how HONO is emitted from the soil and its global impact. We also want to find more proof by doing field measurements in different soil categories and different environments.’