Bacterial lasso gets to the heart of stem cell retention problem

One of the key problems hampering the therapeutic use of stem cells is that it is difficult to get the cells into the right location and for long enough. ‘It was really clear that there was this problem with homing and retention,’ comments Adam Perriman, from the University of Bristol, UK. Now, Perriman, Paul Race and their colleagues have devised a system that helps stem cells to find damaged heart tissue and stick there.

It relies on a surprising link between mouth bacteria a­­nd heart disease uncovered by Catherine Back, also at the University of Bristol, and Paul Race in 2017.2 Their research concerned Streptococcus gordonii, which normally resides harmlessly on tooth surfaces. However, if displaced, the microbe has a protein that allows it to opportunistically colonise the heart, causing severe infections. ‘In the blood stream, the bacteria can reach the heart, where they can bind to damaged or defective heart valves using sticky molecules on their surface,’ explains Back.

The sticky protein, called CshA, operates through a catch–clamp mechanism. This involves a weakly binding lasso of peptides that interact with fibronectin, a protein that is more abundant during wound healing. If the lasso finds a suitable myocardial fibronectin, it latches on and allows the second portion of the protein to firmly clamp onto fibronectin. This combination of a flexible, loosely binding lasso and a tightly binding clamp allows S. gordonii to find its target and remain there. 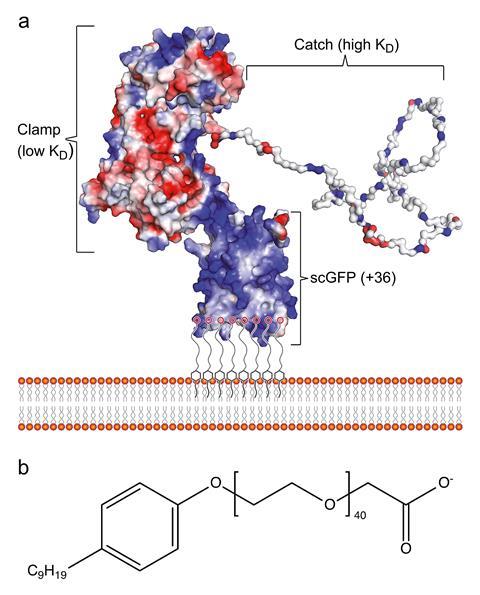 The chimeric construct synthesised by the group. (a) The entire construct with lasso and clamping proteins bound to supercharged green fluorescent protein embedded into a phospholipid bilayer using a surfactant. (b) The surfactant molecule with anionic head group

Borrowing from S. gordonii, Perriman and Race’s team synthesised the gene sequence for CshA fused to a positively supercharged green fluorescent protein and expressed this in Escherichia coli. After purifying this chimeric construct using metal affinity chromatography, they introduced it to a surfactant molecule designed to have a negatively charged carboxylate group and long alkyl chain. The negative portion of the surfactant coordinated electrostatically inside the supercharged green fluorescent protein while the hydrophobic alkyl chain nestled inside the phospholipid bilayer of the stem cell membrane.

‘You can almost do it without the surfactant because cells are negatively charged – supercationic proteins will interact but they tend to endocytose [be absorbed into the cell] very quickly,’ explains Perriman. The surfactants ensured longer persistence times on the cell surface allowing enough time for the lasso and clamp to get the stem cells to the right heart tissue.

With this homing construct at hand and the binding verified with assays, the next test was a mouse model. This showed an increase in the homing propensity of the stem cells and confirmed that the system was not cytotoxic. ‘This is a remarkable cell delivery technology that could also be translated to the delivery of therapeutic cells to different organs. It’s a promising piece of work that opens a plethora of opportunities,’ says chemical biologist Barbara Bernadim from the University of Cambridge, UK.

Christine Mummery, who uses stem cells for cardiovascular disease research at Leiden University Medical Center in the Netherlands, praises the system’s clever chemistry. However, as the study uses human mesenchymal stem cells Mummery says that ‘the therapeutic potential for the heart of such a promising approach cannot be made on the basis of the results presented’.

Perriman acknowledges this and says ‘there is nothing specific about the technology so you could pretty much put it on any cell’ allowing the CshA, supercharged green fluorescent protein and surfactant construct to be applied to other therapeutic cells. He also adds that, despite the success of the Avenger films and popularity of the Incredible Hulk, people might not want to have bright green cells so they are also working on developing the ‘next generation of anchor regions’ as part of the spin-off company Cytoseek.