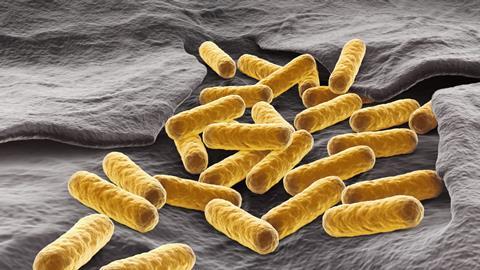 By completely rewiring Escherichia coli metabolism this powerhouse of synthetic biology has been evolved to consume carbon dioxide.

The majority of the organisms on the planet live their lives as autotrophs. These are the plants, microbes and others that use energy, often in the form of light and carbon, to synthesise their own food. Autotrophs, therefore, play a major role in the planet’s carbon cycle, and can help humanity tackle its carbon dioxide problem.

Efforts to build or tweak photosynthesis are common but converting E. coli that produce carbon dioxide into a bacterium that uses it as an energy source is new. Ron Milo, a systems biologist at the Weizmann Institute of Science in Israel, and his team achieved this by coaxing E. coli to evolve an autotrophic lifestyle whereby it consumes the single carbon compound formate and uses it to produce energy that then drives the production of biomass from carbon dioxide.

The team managed this transformation by inactivating key enzymes involved in normal E. coli metabolism and adding the genes for enzymes that direct the Calvin cycle that autotrophs use to turn carbon dioxide into sugars. The engineered bacteria were then cultured with limited sugar and 10% carbon dioxide. This provided an environment with a selective advantage for E. coli with an autotrophic lifestyle. After around 200 days, successive generations of the bacteria had completed the trophic change. They were now using formate to produce the energy needed for the Calvin cycle.

Researchers converted a common laboratory sugar-eating (heterotrophic) E. coli bacterium (left) to produce all of its biomass from carbon dioxide (autotrophic) by metabolic engineering combined with laboratory evolution. The new bacterium (centre) uses the compound formate as a form of chemical energy to drive carbon dioxide fixation by a synthetic metabolic pathway. The bacterium may provide the infrastructure for future industrial renewable production of food and green fuels (right)

Synthetic biology has long attempted to design a process more efficient than photosynthesis. This is extremely complicated though and requires fitting a host of new genes into a cell. However, sequencing of the genomes of these bacteria revealed that just 11 mutations were needed to create a bacterium capable of capturing carbon dioxide and turning it into biomass.

E. coli are commonly used in synthetic biology to produce everything from drugs to biofuels. Milo explains that this work is ‘a proof of concept for the ability to transform E. coli to perform carbon fixation knowing that other labs could add biosynthetic pathways which could produce useful products’. Right now, the strain is not optimised for industrial applications, grows more slowly than normal strains and is still a net producer of carbon dioxide, albeit a small one.

However, another strength of the method is that formate is easily produced using carbon dioxide and electricity. ‘With solar cells you could produce a lot of formate and then merge this with the formate consuming organism to convert this compound into any other compound,’ says Tobias Erb, a synthetic biologist at the Max Plank Institute in Marburg, Germany. This would, in effect, be hybrid photosynthesis. This type of system could also offset any carbon still produced by the E. coli.

‘In a natural system like algae, the same cell must capture light energy and do fixation which comes with a number of challenges,’ explains Martin Jonikas, a molecular biologist at Princeton University. For him, separating the light harvesting aspect from carbon dioxide fixation is one of the main opportunities of this approach.

Milo continues to investigate the genetic basis for the transition and is focusing on evolving the bacterium to grow at ambient carbon dioxide levels in order to pave the way for industrial applications.