Stripy nanowires have been developed as a platform for the simultaneous detection of different toxins or bioweapons. 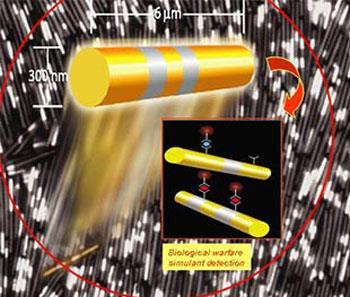 A team led by Jeffrey Tok at the Lawrence Livermore National Laboratory in Livermore, California, used a sensing method based on so-called sandwich immunoassays, which are also found in home pregnancy test kits.

Tok’s group, in collaboration with researchers at Stanford, the University of California at Davis, and the company Nanoplex Technologies, replaced the blue dye of the pregnancy test with a fluorescent dye, and the solid substrate with a mobile nanowire consisting of alternating stripes of gold and silver.

They suggest that nanowires barcoded with different striped patterns can be made to carry a series of antibodies that can latch on to different targets.

As a proof of principle, the researchers demonstrated that their wire construct can sense bacterial spores, viruses and proteins. Instead of highly dangerous bioweapon materials such as anthrax, pox virus and ricin, however, they used one entirely harmless representative out of each group. The detection limits they observed are comparable to those obtained with other platforms, such as microarrays1.

In further experiments, the scientists showed that the barcoded nanowires can also be made magnetic by addition of a nickel cap at each end, without loss of sensor performance. This magnetism can help to separate the nanowires from solution for analysis, the group found, allowing an assay to be completed in three or four hours. ’This produces a small, reliable, sensitive detection system that can easily be taken into the field,’ said Tok.

’This is a promising new development in the early detection of very small amounts of biological active substances or organisms,’ said Dominique Vanhecke, who develops microarray multiplexing techniques at the Max Planck Institute for Molecular Genetics in Berlin, Germany.

The researchers are now planning to develop this approach into a microfluidic, automatic and portable device that can carry out tests for many different kinds of potential bioweapons at the same time. ’These developments will be essential for its wider application as an anti-terrorist tool,’ said Vanhecke. ’It will be interesting to see how the assay will perform with samples that are specifically designed to avoid detection.’