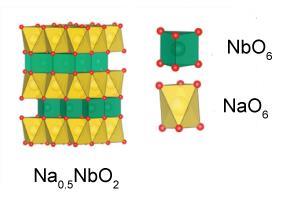 Researchers in China and the US have developed a layered oxide that shrinks when ions are intercalated into it, with the hope of buffering the volume expansion seen in common electrode materials.

Layered oxide materials are very stable, contain large interstitial spaces, and often undergo a volume change, or “strain effect”, when ions are incorporated into their structure. This volume change is detrimental to the electrode as it often results in inferior long-term cycling stability and reduced battery safety. So-called zero-strain materials, where no volume change is seen, are ideal electrode materials. However, these are very rare and most layered oxides exhibit a positive strain effect.

Many layered oxides have the formula AxMO2, and consist of stacked (MO2)n sheets with edge-sharing MO6 octahedra, in between which alkali metal atoms are located at octahedral, tetrahedral, and prismatic sites. Now, Xuefeng Wang at the Chinese Academy of Sciences and co-workers have synthesised Na0.5NbO2, a layered oxide in which the NbO6 clusters are edge-sharing trigonal prisms rather than octahedra. In this structure the sodium and niobium ions are positioned contrary to conventional layered materials.

Na0.5NbO2 is a rare negative-strain material with high stability, a long cycling life and an impressive rate performance. As Jang Wook Choi, a researcher in the Energy Nanomaterials Group at the Korea Advanced Institute of Science and Technology explains, ‘this is opposite to other cases or common sense, as the volume shrinks even after you put something inside the structure.’ The negative volume effect appears to be a result of enhanced interlayer Na–O interactions and weakened Nb–Nb and Nb–O bonding on sodium intercalation.

Wang and colleagues evaluated Na0.5NbO2 both as an independent electrode material, and as a buffer in composite electrodes with positive-strain materials, in which it counteracts the volume expansion caused by a positive strain effect. The material had a more significant volume effect than other volume buffer materials, as well as being electrically conductive and compatible with electrolytes at the required voltage.

‘The limitation of our system lies in the high cost of niobium and the difficulty of synthesis,’ says Wang. ‘But we think that these results will influence the thinking about layered structures and how to design a better electrode for rechargeable batteries.’