Beating the heat with camouflage makeup 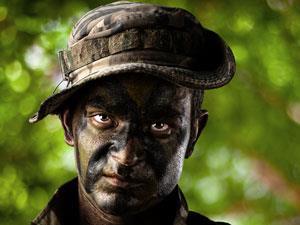 Chemists in the US are developing a camouflage makeup that can protect military personnel from the heat of a bomb blast. The makeup must not only reflect heat, but also needs to contain insect repellent, as well as being comfortable to wear and come in a range of colours.

When a colleague approached Robert Lochhead of the University of Southern Mississippi in Hattiesburg, asking if he could make a heat-reflecting makeup, his first response was ‘you’re out of your mind!’ However, his team took on the project and two years later the makeup is now in field trials.

Speaking at the American Chemical Society meeting in Philadelphia, Lochhead explains that there were several challenges to formulating a suitable makeup. ‘When a bomb goes off, the thermal blast gets to well over 600°C. It only lasts around 2 seconds, but that’s enough to give someone lethal third degree burns.’

First, they needed to find US Food and Drug Administration approved pigments that would retain their colour performance in ­­the visible spectrum, but reflect in the infrared wavelength range of the heat from a flame. Because of the longer wavelengths of the flame spectrum, the particles of the pigments needed to be much bigger than in normal makeup. ‘They’re big enough to feel,’ says Lochhead, saying some of the early formulations were ‘like putting sandpaper on your face’.

The second problem was making the makeup non-flammable. This meant the team had to use silicones as the base for the makeup, as hydrocarbon oils would absorb heat from the flames and ignite. This also made the US Department of Defense’s mandate that all camouflage paints have to contain 35% N,N-diethyl-m-toluamide (DEET) as an insect repellent challenging. ‘In this context, DEET is essentially fuel,’ says Lochhead. ‘It’s like having petrol on your skin.’

The team therefore encapsulated the DEET in a specially formulated acrylate polymer hydrogel, with enough water around it to stop the DEET from igniting. ‘We had to find a gel that could be hydrated by sweat, because salt often causes gels to collapse,’ Lochhead points out.

‘It is also clever to use broad pigment particle size distribution along with polymers to create a face paint to protect soldiers’ skin,’ says Anjali Patil from the Revlon Research Center in Edison, US. Patil applauds the team’s choice of materials to overcome the challenges of the project, particularly incorporating DEET in the formulation.

To make the makeup durable enough to withstand rain, humidity, sweat and all the other conditions a soldier can face, the team borrowed technology from non-transferrable lipsticks. But it still took thousands of attempts to formulate a product with the required performance and aesthetic characteristics. ‘I never thought aesthetics would be such a big concern for soldiers,’ says Lochhead, ‘but comfort turns out to be a big factor when you’re wearing this stuff all day.’