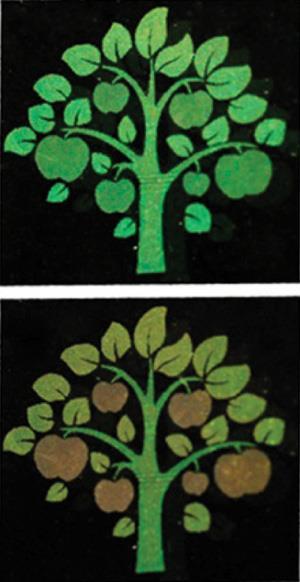 Simply breathing on money could soon reveal if it’s the real deal or counterfeit thanks to a beetle-inspired ink that reversibly changes colour in response to humidity. The photonic crystal ink developed by Chinese researchers can produce unique colour changing patterns on surfaces with an inkjet printer system, which would be extremely hard for fraudsters to reproduce. The work also shows promise for other applications including displays and wearable sensors.

The ability of photonic crystals to control the flow of light makes them a suitable material for diverse applications including optical communications, biosensors and solar cells. Most of the research over the past 25 years, however, has used expensive high precision tools developed by the microelectronics industry to create their desirable properties.

Inkjet printing of photonic crystals onto a surface is cheaper, but previous efforts have struggled to integrate responsive photonic crystal inks into such a system. Now, Ling Bai and Zhongze Gu and colleagues at Southeast University in Nanjing, China, have developed a photonic crystal ink that mimics the way Tmesisternus isabellae – a species of longhorn beetle – reversibly switches its color from gold to red according to the humidity in its environment.

This color shift is caused by the adsorption of water vapour in their hardened front wings, which alters the thickness and average refractive index of their multilayered scales. To emulate this, the team made their photonic crystal ink using mesoporous silica nanoparticles, which have a large surface area and strong vapour adsorption capabilities that can be precisely controlled.

Using the ink in an inkjet printer, the researchers produced complex patterns on rigid and flexible materials and showed that their colour can be reversibly and precisely controlled – shifting from green to red or yellow for example – in response to nitrogen and ethanol vapours. They even saw patterns change colour simply in response to breathing on them.

‘It is particularly refreshing to see simple techniques such as inkjet printing being used to such great effect,’ says Thomas Krauss who investigates photonic crystals at the University of York. ‘Being able to create highly functional photonic crystals by low-cost techniques is important for commercial applications, and I believe that the type of flexible and scalable technology demonstrated here has a great future.’

‘We think the ink’s multiple security features may be useful for antifraud applications, however we think the technology could be more useful for fabricating multiple functional sensor arrays, which we are now working towards,’ adds Bai.