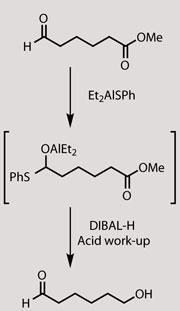 : Forming an O,S-aluminium acetal allows reduction of an ester in the presence of an aldehyde

Belgian chemists have uncovered a method to bypass the standard reactivity hierarchy of carbonyl compounds, allowing a ketone or ester to be reduced in the presence of a more reactive aldehyde. The method could help streamline organic synthesis by cutting out extra steps needed to protect sensitive aldehydes.

Istv?n Mark? and his team at the Catholic University of Louvain were developing a completely different kind of reaction when they stumbled upon a way of temporarily rendering aldehydes unreactive. ’We were trying to catalyse a tandem process with two distinct steps,’ he says. The first step was a Claisen rearrangement that would end up generating an aldehyde, then the idea was for the aldehyde to participate in an ene reaction.

Both reactions are catalysed by Lewis acids. ’The best catalyst for the first step was diethylaluminium benzenethiolate (Et2AlSPh),’ says Mark?, but surprisingly it completely failed to catalyse the second step. ’We always isolated the intermediate aldehyde,’ he explains. The team discovered that the aldehyde was reacting to form an O,S-aluminium acetal - which then couldn’t participate in the ene reaction - but the mild acidic reaction work-up made it revert to the aldehyde.

Further investigation soon showed that Et2AlSPh is also remarkably selective for aldehydes. It reacts only very slowly with ketones and not at all with esters. ’What I really did not expect, but my student tried without telling me, was that we could take a molecule with both an aldehyde and an ester and reduce the ester selectively,’ Mark? adds. ’If there is a difficult reaction to do, it’s that one.’

This kind of chemoselectivity problem comes up a lot, both in academic and industrial chemistry, says Phil Baran, an organic chemist from the Scripps Research Institute in La Jolla, US. ’Usually it would be addressed with brute force protecting group or redox operations,’ Baran adds, which add extra steps to the synthesis and reduces efficiency. ’This is a more in situ type of protection and it’s fairly traceless. It’s really impressive.’

Mark?’s team is now investigating whether the O,S-aluminium acetals are compatible with other reactions of carbonyls, which are extremely versatile functional groups. ’We’re now trying to do Wittig type [C=C bond forming] reactions, Grignard additions and a whole range of other reactions,’ he says.