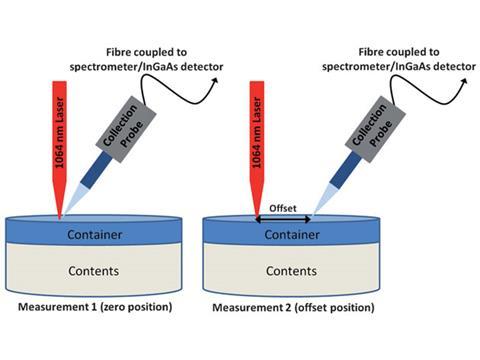 A team working in the UK have demonstrated that spatially offset Raman spectroscopy (SORS) using short wave infrared can detect chemicals through physical barriers such as containers, which is a step forward in detection and security.

The performance of SORS compared to conventional Raman (CR) spectroscopy to detect the sub-surface layer beneath a barrier is better because of its ability to suppress fluorescence and Raman scattering from the target container. However, there is still a problem with the fluorescence of the target chemical beneath, as this can mask the useful Raman signature that can be used to identify the contents.

Rebecca Hopkins and colleagues from the Defence Science and Technology Laboratory, Porton Down, Salisbury, have found that by using a higher than usual excitation wavelength of 1064nm, fluorescence from the target chemical is avoided, as the incident photons have less energy.

‘SORS is an exciting technique that has the potential to address the technical challenge of detecting materials through barriers for a number of critical applications, including non-invasive biomedical analysis, counterfeit drug monitoring and analysis of dangerous materials concealed within containers,’ comments Hopkins.

While CR has been used before for detection, it’s usually with more conventional wavelengths that cause fluorescence. ‘In this work we have demonstrated that increasing the wavelength of the incident laser [1064nm excitation] avoids fluorescence whilst still achieving the SORS effect to detect materials through opaque plastic and coloured glass containers,’ she adds.

Edward Bartick, the director of the Forensic Science Program at Suffolk University, Boston, US, believes that this SORS method shows obvious advantages over CR spectroscopy. ‘The greater ability to noninvasively identify contraband in sealed containers is a significant advantage in forensic applications,’ he says. However, he does cautiously ask: ‘How would the increased milliwatt power required affect sensitive materials such as certain explosives?’

Now that the advantage of this SORS system has been demonstrated, the team’s next step for this technology is to develop a portable, hand-held device that can be used in the field.