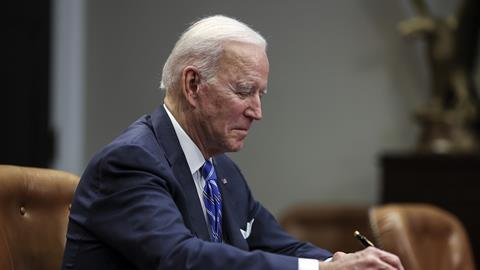 President Joe Biden’s first budget proposal, released in a preliminary form on 9 April, was well-received by the nation’s research community and science advocates. The new president’s request for fiscal year 2022, which begins on 1 October, includes funding of more than $10 billion (£7.3 billion), or 20%, for the National Science Foundation (NSF), with $500 million of that going to climate and clean energy research. It would also create a new technology and innovation directorate at the fundamental science and engineering agency to help expedite technology development.

The Environmental Protection Agency (EPA) would receive more than $11 billion under Biden’s proposal, which represents a boost of more than 21%. Of that amount, $75 million would go toward the EPA’s efforts to accelerate toxicity studies and research into per- and polyfluoroalkyl substances (PFASs). That funding is intended to inform regulatory action on these chemicals and setting enforceable limits in drinking water.

Biden also wants to invest over $110 million to help recruit critical staff for the EPA to carry out its core duties of protecting public health and the environment. The EPA has lost nearly 1000 staff over the past four years, the White House budget document states.

The White House is expected to issue a more detailed budget request in the coming weeks, but Biden has given Congress a starting point to develop its own funding proposals.

‘This is of course very different to what we saw from the previous administration,’ says Matt Hourihan, who heads the AAAS’s R&D budget and policy programme. ‘The Trump White House proposed the most difficult budgets for science and technology of any administration since World War II,’ he says. With its new budget proposal and other initiatives the Biden administration is making ‘a very aggressive pitch for R&D’, Hourihan adds.

Former president Donald Trump’s most recent budget request proposed cutting funding for the NSF and the NIH by 6% each, decreasing the DOE’s Office of Science by 17%, and slashing the EPA’s science and technology account by 32%, according to AAAS analysis. Congress, however, rejected these and similar funding cuts throughout the Trump years.

John Holdren, the former White House science adviser under President Barack Obama, echoes Hourihan. ‘Trump proposed big cuts for science every year of his administration, pretty much across-the-board, and the nation was spared a great deal of damage only because the Congress refused to accept Trump’s cuts,’ he tells Chemistry World. ‘President Biden, in sharp contrast to Trump, understands the importance of federal spending on research and development, as his new proposals indicate.’

Nevertheless, there are question marks around funding for many areas of science. ‘From a chemistry research perspective, there’s still a lot we don’t know,’ Hourihan states. ‘The [DOE] Office of Science, a major chemistry funder, would get a much less aggressive increase, pretty much in line with recent history, and it’s not clear how much would go to chemistry research versus other areas like say quantum computing, or physics infrastructure.’

Further, Hourihan points out that the Department of Defense is another large chemistry funder, and Biden’s budget offers no details on funding for that agency’s research programmes. The overall defence budget, however, would grow by just 1.6%, and experts say that would likely translate into either flat funding or an effective cut for defence research.

Once the new administration releases a more detailed request, probably in May, Congress will then provide actual funding levels through the appropriations process that will go to the president’s desk for his signature. It remains unclear how receptive lawmakers will be to the Biden’s plan to significantly boost federal research support. ‘Some will want to go big, but there are others sounding caution over the fiscal outlook,’ says Hourihan.

Despite apparent bipartisan support in both chambers of Congress for increased research investment, Biden’s funding proposal are expected to face challenges. The president is working with a Democratic-led House and Senate, but Democrats hold the majority in the latter chamber only by virtue of a tiebreaking vote from Vice President Kamala Harris. In addition, there are several Democratic senators who are likely to be on the fence as they are extremely reluctant to embrace anything perceived as ‘big government’.