Chemical and oil firms are using supercomputers to improve every part of their operations. Angeli Mehta reports

It’s a race to the top. The big chemical companies are making serious investments in the latest generation of high-powered supercomputers. They’re talking about not only employing faster processors with bigger memories, but ‘digitalisation’ strategies that will transform the industry and keep them ahead of competition from start-ups. BASF has created a digitalisation department for its research and development, while Evonik has established a digital division that will serve the whole of the specialty chemicals company. 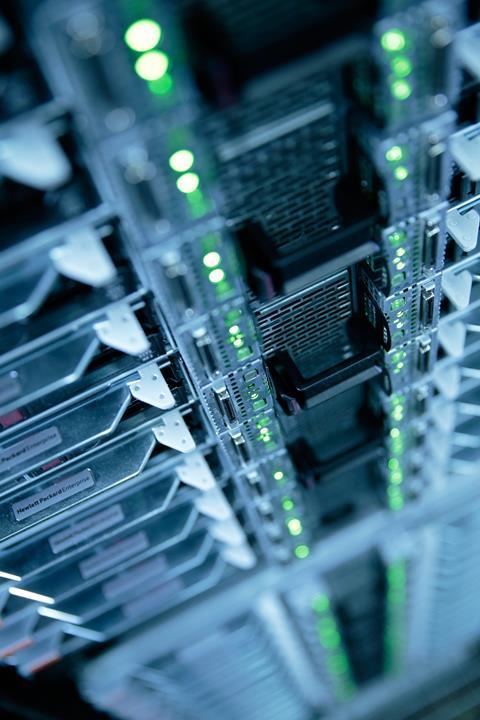 ‘The chemicals industry is relatively advanced when it comes to using digital technology, although we never named it that way – it was all about process optimisation and efficiency,’ says Henrik Hahn, chief digital officer for German specialty chemicals company Evonik. ‘The new aspect of digitalisation is that it will affect the entire company. In our industry it will become more and more important, not only in what we produce but how we deliver and interact with customers.’

Evonik expects to have spent €100m (£87m) by 2020 on testing out and using new digital technologies, and developing digital skills. A partnership with IBM will allow it to use the tech giant’s latest computing technology and machine learning applications to drive the transformation it envisages. It will use IBM’s Watson supercomputer to identify, for example, relationships in unstructured data – so-called data mining – for faster R&D. It also has access to IBM’s prototype quantum computer.

‘There’s lot of hype about digital,’ says Marco Moder , a partner at consultancy McKinsey who specialises in digitalisation in the chemicals and energy sector. ‘It’s supposed to solve many problems, but you need to have a purpose – whether it’s to drive throughput increases, cost reduction or advanced analytics to improve price setting and manufacturing. You can do that quickly. But the hard work is to change the behaviours of – for example – the sales function to believe in it and use it, and then build capabilities in house to maintain it.’ He adds that it’s like ‘buying yourself the latest tennis racket – [that] won’t on its own improve your game’.

But McKinsey’s analysis shows the impact that can be made. They cite a specialty chemicals firm that used advanced analytics to model its production process to a new level of accuracy. It then used the model to provide detailed, real-time guidance – via a specially designed app for the plant’s operators – on how to adjust process parameters to optimise performance. After one month, output at the plant had increased by over 30% and yields by 6%. Energy consumption dropped by 26%, and the company saved on raw materials too.

Announcements from BASF, Dow Chemical, Eni and BP show big chemical and oil firms are moving in the same direction, even if their interpretation of digitalisation differs. Why now? Because data storage is very cheap, computing power is reaching astonishing heights, and data transmission speeds have risen exponentially. Just two years ago, Total announced it had upgraded its supercomputer to 6.7 petaflops – the measure of a computer’s number crunching ability – making it in the top ten of computing power in the world. Today it is eclipsed by Eni’s 22.4 petaflop system which makes it among the world’s top ten processors – able to carry out over 22 quadrillion calculations per second.

The oil and gas companies are harnessing computing power for every phase of the business from seismic data for exploration to the management of big data being generated by operations. That power, combined with AI and machine learning algorithms, are the means to get more out of data, and discover relationships that might not be immediately obvious to humans.

Italian oil group Eni says such large scale computers will revolutionise the way oil and gas activities are managed. Its own proprietary algorithms will also enable it to manage the big data generated in refining and producing its petrochemicals. Its aim is to generate higher yields, cut energy consumption and increase plant reliability. BP’s algorithms running on its upgraded supercomputer and applied to seismic imaging data allowed it to identify an additional one billion barrels of oil in the Gulf of Mexico.

Since last summer Evonik has been developing a chemical and life sciences knowledge corpus using IBM’s Watson Explorer  platform – essentially pulling together all the data stored in any form, from laboratory manuals to information in images. ‘The ultimate goal is to see what we can extract out of this data lake, to see how we can come, for example, to product recommendations. We’ll try to analyse and evaluate whether the knowledge corpus provides new insights which classic R&D would not provide,’ explains Hahn. The first pilot is in the animal nutrition business area, and another is customer focused, an online offering on food supplements. Evonik has introduced a chat-bot, based on the Watson platform that customers can question 24 hours a day. It’s hoped the learning gained in that business-to-consumer environment can be translated into the business-to-business environment. 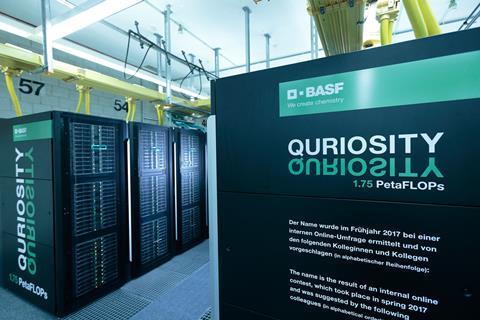 BASF wants to speed up its innovation cycle. It says its strength used to be in the huge research apparatus it had – but that’s no longer enough. Last summer it took delivery of a supercomputer that has given its 10,000 researchers a 10-fold boost in computing power. Those users named the Hewlett Packard system Quriosity. When it was put into operation, Stephan Schenk , team lead for high performance computing and databases, said ‘Until now, we could only change a few parameters in simulations and had to wait for the results. With the supercomputer, far more complex models are possible allowing the variation of significantly more parameters.’

Computer simulations help researchers design better experiments, and in turn the experiments help evaluate computer models. In a presentation, Schenk gave the example an oil-soluble fungicide, forumated to allow its dispersal in water so farmers can spray it on their fields. From its toolbox of 23 monomers, 3 adjuvants and 10 solvents, BASF scientists had 104 possible polymer combinations and 100 million possible formulations. Schenk explained that would mean it could take 1000 years for product development. So it used modelling and simulation to cut the number of experiments. ‘Applying digitalisation in R&D can make a BASF project at least 20% shorter while creating more space for creativity,’ according to a BASF spokesperson.

Both Evonik and Dow Chemicals are partnering with companies that have quantum computing expertise. Materials scientists see quantum computing as a potential solution to many research problems. ‘Quantum computing presents the opportunity to solve a set of problems traditional computers are challenged by. Raw computational power is not so much the issue; it’s the type of problem you can tackle,’ explains Keith Watson , vice-president of core research and development at Dow.

Quantum computing will help us to understand a material

Whereas conventional computers can only do one thing at a time (so the more complex the problem the longer it takes), quantum computing exploits the counter-intuitive laws of quantum physics and offers the promise of testing all solutions at the same time but with the computational effort of a single calculation.

A big focus is on catalysis. Dow is working with Vancouver quantum computing software firm 1QBit to develop tools for quantum computing applications. Being involved ‘lets us keep our finger on the pulse as to where quantum computing is going’, according to Jamie Cohen, R&D director and project lead. All Dow’s catalyst chemists and molecular modelers work together in Cohen’s division on quantum computing approaches to speeding up the discovery of new functional molecules and materials. ‘We want to make sure we’re doing the best experiments and quantum will help us to understand a material – why it works – so we can start the do loop over again,’ explains Cohen.

‘If we can have a deep understanding through experiment and simulations as to why catalyst A worked, it becomes easier to develop catalyst A1,’ adds Watson. The application is not just in the discovery but in developing and commercialising a product. A key application area for Dow is polyolefins – it’s one of the world’s biggest producers of polyethylene – and the hunt is on for improved catalysts to make them cheaper and better.

Quantum computing ‘has the potential to become a game-changer,’ asserts Hahn. But he questions if the classic R&D labs will simply replace their beakers to just run computing simulations. ‘Having the technology available is a huge plus but you have to do a lot of theoretical work to set up the right models. For example, in catalysis, [the] models are very complicated. What makes more sense for me is that supercomputers, and [eventually] quantum, will complement classic R&D rather than substitute it – at least in the short to medium term.’

While computational chemists might warmly embrace the new technologies, others might take more convincing. As Hahn points out, digital is not always well received or easily adopted. But digitalisation promises to touch every aspect of a company’s business and its people.