Biofuels without the blend

Scientists in the US have come up with a method to recycle agricultural waste into renewable alkenes for jet and diesel fuel. The breakthrough opens the door to biofuels that do not rely on special farms and that can directly replace their petroleum counterparts.

Biofuels have long been considered a promising means to reduce our dependence on oil, but traditional candidates have faced several problems. Ethanol, for instance, can be oxygenated for use in combustion engines, but only as a blend where the other 90 per cent is petrol. It is also of little use to aeroplanes, since it has such a low energy density. Finally, there is the issue of where the ethanol comes from: typically vast corn fields, which often require huge areas of deforestation.

In light of this, many researchers have been considering ways of making ’second generation’ biofuels from the woody, non-edible parts of biomass, such as sugar-cane pulp, which would otherwise go to waste. Already this biomass can be used to produce gamma-valerolactone (GVL), an organic compound that can be blended in small amounts with petrol or diesel. GVL’s value can be improved once it is reduced with hydrogen, but the process is not that efficient and it still needs an added 30 per cent petrol to make it a viable fuel.

Now, researchers at the University of Wisconsin-Madison, US, have found a way to convert GVL into a fuel that requires no blending at all. They have developed a strategy ’by which GVL is converted to compounds with high energy density - alkenes in the molecular weight range appropriate for jet fuel,’ say James Dumesic and Jesse Bond, two of the paper’s authors. ’Because of its high energy density, such a product could replace hydrocarbon fuels without blending limits and be utilised for applications such as jet fuel where more traditional biofuels fall short.’ 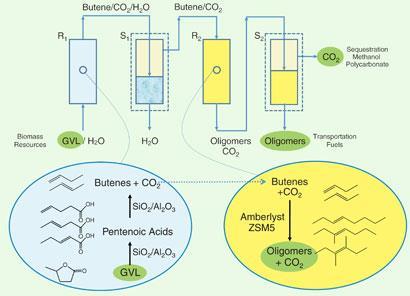 The process the team used to generate fuel from GVL

GVL is a cyclic ester that contains two oxygen atoms, which need to be removed to make an energy-dense fuel. The Wisconsin group begin by using a solid-acid catalyst to split the ester ring into a long chain. They then use another solid-acid catalyst to break off the carbon bonded to the two oxygens, leaving butene and carbon dioxide. While the carbon dioxide can be easily collected for sequestration, the butene can be put through a standard process to couple into large alkenes as a high energy-density liquid.

George Huber, an expert in biofuels at the University of Massachusetts, US, calls it ’a very exciting discovery’. ’The process also is likely to be very economical because it doesn’t use hydrogen or [precious] metals,’ he added. ’This paper shows the power of catalysis and chemical engineering in solving our energy challenges.’