A strain of nitrogen-fixing ocean microbe has been found to be the most efficient hydrogen-producing microbe to date, boosting the prospect of one day using hydrogen as an environmentally friendly fuel.

The US team behind the discovery says the naturally occurring cyanobacteria Cyanothece 51142 turns solar energy into hydrogen under aerobic conditions at rates several times higher than any other known photosynthetic microbe.

Normally, microbes that produce hydrogen do so under anaerobic conditions. This is because the enzymes they use for hydrogen production, namely nitrogenase and/or hydrogenase, are inhibited by oxygen. By understanding the way Cyanothece  51142 grows and fixes nitrogen, the team learned that nitrogenase was involved in its metabolism, raising suspicions of its hydrogen producing potential under unusually aerobic conditions.

’We expected high rates of hydrogen production, but we were very surprised to find such high rates "right out of the box,"’ says co-author Louis Sherman, of Purdue University in West Layafette, Indiana, who collaborated with Himadri Pakrasi’s lab at Washington University in Missouri, US.  ’The strain has amazing capabilities and we think that there is still untapped potential.’

Cyanothece  51142 is able to produce hydrogen aerobically because it controls its metabolic processes by a circadian clock. It photosynthesises during the day and fixes carbon which it stores as glycogen, and at night it begins fixing nitrogen using the glycogen as an energy source and nitrogenase to convert N2 to NH3 with H2 as a byproduct. Although oxygen is present, high rates of respiration create an anaerobic environment in the cells which allows nitrogenase to function. 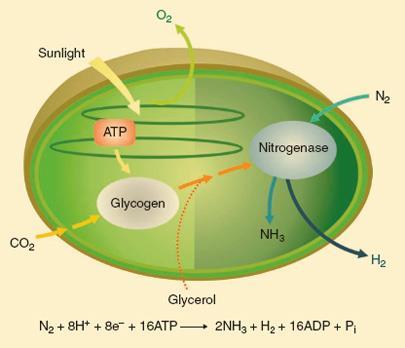 Biohydrogen production by Cyanothece 51142 cells using solar energy and atmospheric CO2 and/or glycerol. CO2 is fixed during the day to synthesise glycogen, which serves as an energy reserve and electron source for H2 production at night

The team experimented with various conditions to optimise the cyanobacteria’s hydrogen production, and found that the microbes produced much more hydrogen if grown in the presence of additional carbon sources including glycerol, a waste product of industrial biodiesel production. The extra carbon is thought to boost the activity of nitrogenase.

By growing cells in glycerol-supplemented media and incubating under an argon atmosphere, the team obtained its highest yield of 467umol of hydrogen per mg of chlorophyll per hour, an order of magnitude higher than any other known hydrogen producing photosynthesising microbe.

’The nitrogenase system in general has been dismissed by many scientists as a sustainable route to photo-H2, in large part owing to the additional overhead paid for cellular energy in the form of ATP required by this pathway. The present work urges us to take a fresh look at this system,’ says Charles Dismukes, who studies chemical methods for renewable solar-based fuel production at Rutgers, The State University of New Jersey, US. ’It is a superb example of what can be learned from mother nature and applied to biotechnological applications, though there is much to be studied before such a system could be utilised in the commercial sector,’ he adds.

Sherman is aware of the challenges ahead but is hopeful that the work will boost research into hydrogen fuels. ’It will stimulate other biologists to keep studying photosynthetic microbes to find one with even better properties. And it will help policy makers realise that bio-hydrogen production is a possibility and enhance research into all of the other areas that need to be studied before a "hydrogen economy" is a reality,’ he says.