Scientists in the US have created a rechargeable ’lithium ion’ battery with the help of a genetically programmed virus that acts as a scaffold for highly conductive electrodes. The battery is as powerful as other leading lithium-ion batteries, but is cheaper and far less toxic to produce. 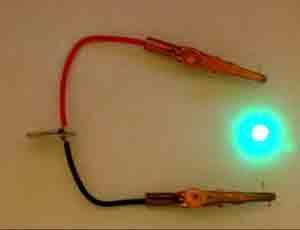 In real devices the anode tends to be a simple material such as graphite, whereas the cathode can be one of several more complex compounds, such as lithium iron phosphate (LiFePO4). The best electrodes allow lithium ions to migrate easily so that the batteries have a greater capacity and discharge rate, and for this reason many researchers have tried creating electrodes based upon nanoparticles for a less restrictive structure. But, despite improvements in synthesis techniques, they have not yet managed to make the nanoparticles small enough for this to work.

Angela Belcher and colleagues from the Massachusetts Institute of Technology (MIT) in the US, however, have found that electrodes based on viruses are a feasible alternative. They have manipulated the genes of the simple ’M13’ virus so that it is equipped with certain short polymers known as peptides. On one end of the virus the peptides can bind with carbon nanotubes, while on the rest of the virus the peptides can help instigate the growth of amorphous iron phosphate (a-FePO4). Although a-FePO4 is not usually a good conductor, the nanotubes work together to enhance conductivity across the entire virus.

In tests using the virus-based structure as a cathode in a simple lithium-ion battery circuit, the MIT group found that they could achieve a discharge capacity of 130mAh/g, which is comparable with the state-of-the-art LiFePO4 electrode material. Moreover, they could retain a good capacity for at least 50 one-Coulomb cycles of charging and discharging.

’What we are excited about is that our battery materials get better and better as we genetically engineer them,’ says Belcher. ’We are now using this same approach to try to increase the power more in other types of materials that are not commercially available, to make even higher-power materials.’