Scientists in the US have created a light-activated molecule that can control blood clotting. The molecule, which works with the help an enzyme, could one day be used in medicine to shut off blood supply to localised areas of the human body such as tumours.

The past decade has seen a strong interest in studying the way light can trigger certain molecules to change from a stable state to an unstable one. This transformation is known as photochromism, and it is exploited, for example, in certain eyeglasses that darken on exposure to UV sunlight. One type of photochromism generating interest in medical science is photoisomerism, in which light causes molecules to switch their entire structural symmetry, from ’cis’ (when chemical groups occupy the same side of the molecule) to ’trans’ (when they take opposite sides).

Weihong Tan and colleagues from the University of Florida have worked with a photoisomerisable molecule called azobenzene, a compound containing two phenyl rings joined by a double nitrogen bond. Using DNA synthesis, they have added to this molecule an active DNA strand called an aptamer. This strand can deactivate the enzyme thrombin, which occurs naturally in the human body and promotes blood clotting.

The researchers found that when they exposed their molecule to visible light it assumed its ’trans’ form, where it curls around the aptamer, shields it from any thrombin and therefore allows clotting to proceed. However, when they exposed it to ultraviolet light it they found it opens up into its ’cis’ form so that the aptamer can contact the thrombin and prevent clotting. 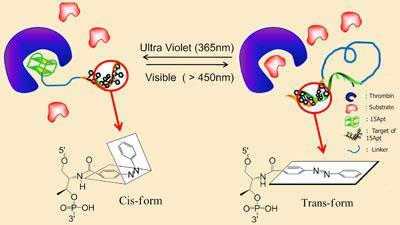 The trans and cis conformation is reversibly regulated by light of different wavelengths.

The idea is that the molecule could be injected into the human body and, in combination with selective exposure to light, starve problem areas such as tumours from a blood supply. Tan told Chemistry World that by changing the type of aptamer present it might also be possible to use the molecule to locally activate drugs.

Dirk Turner, a chemical biologist at the University of Munich who has in the past used different methods to control thrombin, appreciates that fact that the US group’s study takes this general approach. ’It’s a very nice piece of work,’ he says. ’As a proof of concept it’s great, and it would be really exciting if they could prove that it works in cells.’