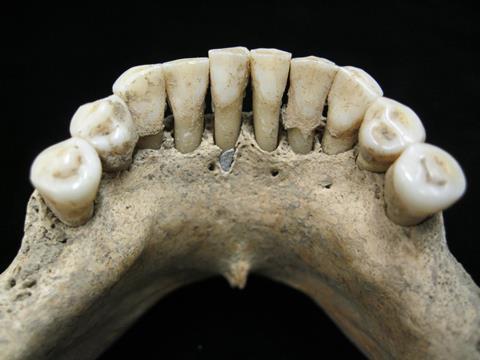 Particles of blue pigment discovered in the dental tartar of a medieval nun’s teeth suggests she was a highly skilled artist involved in the production of high-end books. The work offers fresh insight into women’s often overlooked role in the manufacture of medieval manuscripts.

Only a handful of different blue pigments were used during the European medieval period, the most expensive and rare being ultramarine, a fine powder derived from the stone lapis lazuli that back then was mined exclusively in Afghanistan. Only the most expert and trusted scribes and painters would have been allowed to use the pigment, says Christina Warinner at the University of Zürich, Switzerland, who led the research.

‘We were extremely surprised, twice. First by finding the blue pigment at all, and then when we finally identified it,’ she tells Chemistry World.

The team had originally set out to investigate the dental calculus, or tartar, on the ancient woman’s teeth in order better understand the health and diet of women in the Middle Ages. Her skeleton was excavated decades ago from a medieval cemetery linked to a religious community near Dalheim, Germany, which suggests she was likely a nun.

The pigment was discovered when co-author Anita Radini at the University of York, UK, was undertaking a standard overnight procedure to break up the calculus required for closer examination by decalcifying it in weak acid. She decided to watch the first few hours of the process and unexpectedly observed blue particles emerge. But by morning they had vanished. 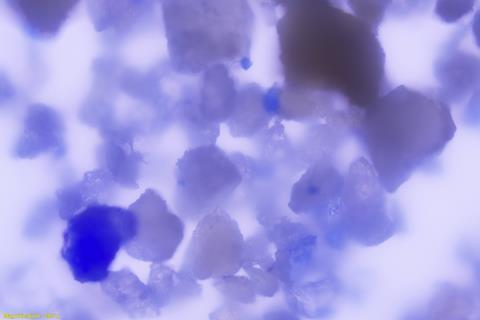 Intrigued, the team sought an alternative method to break up the calculus while retaining the blue particles, eventually finding that sonication in ultra pure water worked best. They then analysed the particles using microscopy and spectroscopy.

‘Early on, I was convinced it would turn out to be azurite, a much more common and less expensive mineral pigment,’ says Warinner. ‘When the analyses made it clear that it was lazurite, the blue mineral that gives lapis lazuli its rich blue colour, I was shocked. And then when we also identified phlogopite, an accessory mineral also found in lapis lazuli, I was over the moon with excitement.’

So how did the pigment get trapped in the nun’s teeth? The researchers ruled out several possibilities, including inhalation of pigment during preparation, consuming it as a medicine, or the ritualistic kissing of painted texts. Their most compelling and plausible explanation was that the nun frequently licked the tip of an ultramarine-coated paintbrush when adding fine detail illuminations to manuscripts. Increasing evidence suggests that quality books were actively produced in women’s monasteries by the 12th century.

‘We knew that medieval women were scribes and that lapis lazuli was in use as a pigment in the West from [the 11th century] onwards. But [this] gives us a new sort of evidence,’ comments Mark Clarke, an expert in medieval paint at NOVA University in Caparica, Portugal. ‘This technique will hopefully identify more craftspeople by the accretions in their dental calculus, not necessarily just painters. Here she is, perhaps the only confidently identified medieval craftsperson, and certainly the only one whose occupation can be determined.’