The millions of PET drinks bottles that are discarded each day across the globe might provide a surprising feedstock for the pharmaceutical industry to make drugs to combat drug-resistant fungal infections.

James Hedrick of the IBM Almaden Research Center, US, and colleagues have used supramolecular chemistry to self-assemble a range of polymer-like structures that display antifungal properties. The compounds were made using chemicals from the breakdown of PET bottles and should have fewer side-effects than conventional drugs, as well as hopefully side-stepping drug resistance problems seen in pathogenic species of Candida and Aspergillus fungi. The team's initial tests with a mouse model of infection with resistant Candida albicans shows that even prolonged sub-lethal doses of the compounds does not trigger resistance.

‘Breaking PET down to its base molecules and then transforming them into new materials is a key discovery,’ Hedrick says. ‘We're actively engaged with partners to figure out how to produce these chemicals at scale for a variety of applications across consumer goods and pharmaceuticals,’ he adds. 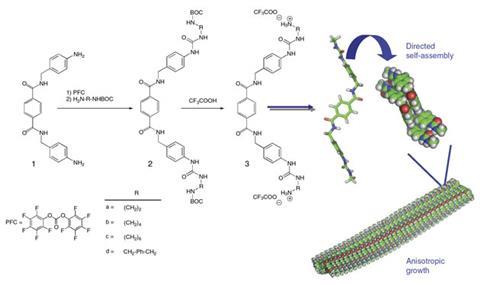 Drug resistance in a wide range of fungal microbes is on the rise and some observers suggest that it may ultimately present a greater medical problem to human health than the so-called drug resistant bacterial ‘superbugs’. As such, the development of novel agents that can home in on fungal targets with high specificity and without the emergence of drug resistance are now keenly sought. One of the biggest obstacles facing drug developers in this area is that pathogenic fungal cells are metabolically very similar to human cells, much more so than disease-causing bacteria. This means that a lack of specificity, and thus potentially severe side-effects, are a significant concern.

Hedrick and colleagues have, however, found a group of cationic small molecules that can target fungal microbes selectively, so should have few side-effects. In terms of the ease with which these compounds might be investigated they each have, unlike cationic polymers, an absolute molecular weight, but several of the advantageous properties of cationic polymers nevertheless, such as biocompatibility and pathogen specificity.

Amphiphilic macromolecules, such as synthetic polymers have been investigated before as antifungal agents and kill fungi by taking apart their negatively charged microbial cell walls through electrostatic interactions. This kind of mechanism is difficult to defend against at the molecular level and so it is hoped will not give rise to resistance. Unfortunately, synthetic macromolecules of this type and even peptides are degraded rapidly by enzymes in the body. Additionally, they are very costly to manufacture.

The team has based their novel low molecular weight structures on the self-assembly of terephthalamide-bisurea structures that computational studies suggested would have zigzag or bent arrangements in which benzyl urea groups away from the centre stabilise the supramolecular assemblies in water. The structures were then observed experimentally using transmission electron microscopy (TEM) and atomic force microscopy (AFM). The team prepared and tested four compounds with ethyl, butyl, hexyl and benzyl amine spacers between the urea and cationic charge.

The substances are polymer-like in some ways, forming fibrous structures in water, which bolsters the local concentration of charge at a target site. The zigzag and bent structures facilitate their packing. The team suggests that this behaviour could be critical to the structures' ability to split fungal membranes without causing serious side-effects – even at doses above those that would be used therapeutically.

‘This work provides new insight into molecular designs for antimicrobials effective against resistance mechanisms,’ says Kenichi Kuroda of the University of Michigan, US.’[It is ] very interesting because of the following three points: selective antifungal activity, biomimetic action that mimics naturally occurring host–defence antimicrobial peptides in the innate immune system of our body and a smart approach to utilise molecular assemblies as new antimicrobials that are smaller than polymers and less costly than peptides.’