US scientists have taken the first tentative steps towards a synthetic yeast genome. They’re not planning to bake bread or brew beer with their new artificial life form but the work could expand the toolbox with which researchers can manipulate DNA. The approach might be used to introduce genetic diversity into the genome for selection experiments.

It might also provide clues to human genetics given that yeast cells are more closely related to our own molecular biology than they are to other microbes. Ultimately, the development of such synthetic genomes might allow researchers to create artificial organisms that can produce specific chemicals, such as drugs or even polymers. 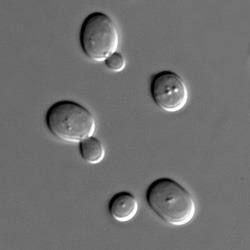 Jef Boeke at Johns Hopkins University, in Baltimore, Maryland, and colleagues have taken the first steps towards the design and construction of a synthetic version of the yeast genome, which they call Sc2.0, with the production of a partially synthetic yeast chromosome. To construct the synthetic yeast genome, the team first defined three design principles. The first demands that the synthetic genome must produce ’fit’ yeast cells that resemble the wild-type in growth rate. Secondly, it should not have any destabilising elements such as tRNA genes, transposons, or sub-telomeric repeats. Thirdly, it must be genetically flexible to allow future research.

The team based their synthetic chromosome arms - synIXR, and semi-synVIL - on an abbreviated natural sequence found in the yeast, Saccharomyces cerevisiae. Embedded within the arm was a ’customisable evolution system’ they refer to as SCRaMbLE - synthetic chromosome rearrangement and modification by loxP-mediated evolution. This gave the researchers the opportunity to introduce mutations into the yeast genome thereby giving rise to various genotypes and phenotypes.

More specifically, the team’s designed sequence, synIXR, was based on a native IXR sequence containing almost 90,000 DNA base pairs. They removed a transfer-RNA gene, a Ty1 long terminal repeat (LTR) and the sub-telomeric sequences to adhere to their second design principle.

The final synthetic sequence adds more than 1000 base pairs, which account for the inclusion of the 43 loxPsym sites for the code necessary for SCRaMbLE to function. All in all, the synthetic chromosome differs from its natural counterpart by more than 20 per cent, most of which (17 per cent) was changed by base substitution, deletions or insertions.

’When complete, the fully synthetic genome will allow massive restructuring of the yeast genome, and may open the door to a new type of combinatorial genetics based entirely on variations in gene content and copy number,’ the team says.

’This is a major step for genome-scale engineering,’ says George Church from the Massachusetts Institute of Technology, US. ’It is much more than a simple copy of a genome,’ he says, ’also it involves a eukaryote - one already quite important for biotech and academic studies.’ He also believes that the work, ’articulates a vision that should attract many other labs to join because it is inexpensive to do, combinatorial and robust.’