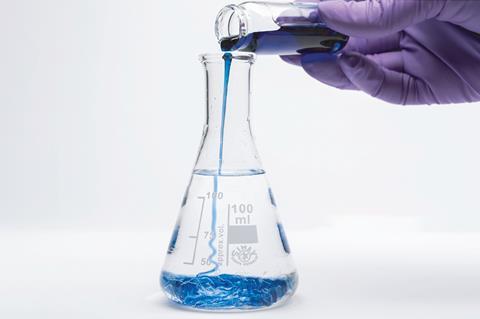 Methyl viologen radicals, used in self-dimming windows, can be stabilised in a deep eutective solvent

A chicken feed supplement and urea can tame and substantially prolong the lifetime of a deep blue organic radical produced from a common herbicide. This could help create chemically stable, versatile and cheaper organic materials for applications including self-dimming windows, solar cells and batteries.

Choline chloride is an additive used in poultry feed. When it’s mixed with twice the amount of urea, it forms one of the most common deep eutectic solvents (DESs). First discovered in 2003, DESs are ionic liquids typically comprising two asymmetrical components – a salt and a hydrogen-bond donor – to create a complex that has a lower melting point than each of the individual compounds.

Methyl viologen, or paraquat, is widely used as a herbicide. While it is normally colourless, it can become a deep blue viologen radical through the addition or loss of one electron. On top of being efficient electron mediators, having this electrochromic property makes methyl viologen radicals an attractive chemical species for molecular machines, biosensors and colour-changing displays. The problem is that viologen radicals are unstable and breakdown within seconds when exposed to air.

More stable viologen derivatives provide a workaround and these have already been used by US-based tech firm Gentex in anti-glare rear-view mirrors and, more recently, dimmable windows in the Boeing 787 Dreamliner. But modified viologens require expensive and complex manufacturing steps to exclude oxygen, which limits their use.

Now, Oren Scherman’s lab at the University of Cambridge, UK, has discovered that a range of DESs, including one made with choline chloride and urea, can keep methyl viologen radicals stable in solution for at least six months when exposed to air. This increased their lifetime around 100,000 times, compared with using water as the solvent.

Experiments suggested that the radical is stabilised via a combination of factors. First, oxygen is poorly dissolved in DESs. Second, the unique DES nanostructure, as well as interactions associated with hydrogen bond donors between the radical and the solvent, shield the radical from oxygen. ‘Importantly, the stability is not a result of augmenting the structure of the chemical species nor is it a result of the introduction of another molecule such as a macrocycle or cage,’ explains Jade McCune in Scherman’s lab. ‘The approach we report is based on shielding of the radical species through supramolecular engineering of the solvent environment.’

The team initially observed that methyl viologen radicals were produced as a function of temperature when the DES was heated beyond the typical 80°C needed to form. Conducting mass spectrometry and gas-phase infrared experiments, the team pieced together the temperature-triggered catalytic cycle that induces radical formation to produce a deep blue solution.

Further experiments demonstrated the reversible switching behaviour of methyl viologen between colourless and an intense blue within a range of DESs. The researchers also found that four different triggers could form radicals: sunlight, electricity, a reducing agent and heat. Existing colour changing materials usually only respond to one stimulus.

To demonstrate potential applications, the researchers made a model smart window. It comprised two pieces of conducting tin oxide glass separated by a membrane. A DES was painted onto one piece of glass, while a methyl viologen-containing DES was painted onto the other. When a negative electrical current was applied, the window rapidly changed from transparent to blue, with the colour persisting after the electric bias was removed. Applying a positive bias reversed the effect, and the device could undergo multiple switching cycles without loss of performance.

‘This is an amazing property of DESs that is applied effectively here to redox chemistry,’ comments John Murphy, who investigates radical chemistry at the University of Strathclyde, UK. ‘The diverse stimuli that trigger the switch to methyl viologen radicals and the convenience of handling solutions of methyl viologen radicals under air will have important and widespread implications for device design.’