Using nothing more than the standard chemistry lab equipment, researchers in the US have successfully turned the discovery of new catalytic reactions into a high-throughput process. The team have already used their simple yet powerful approach to discover several new reactions, yet have barely scratched the surface of what the technique could achieve.

Perhaps the biggest advantage of the technique is that any organic chemist should be able to make use of it. While a number of approaches have previously been described to turn the discovery of new catalytic reactions into a high-throughput process, they have tended to require specialist techniques or costly equipment. John Hartwig of the University of California, Berkeley, and his graduate student Daniel Robbins have developed a process which relies on standard chemistry techniques and equipment no more expensive than a gas chromatograph-mass spectrometer (GC-MS). 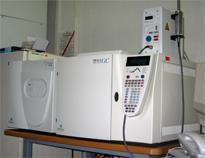 GC-MS can be used to rapidly and simply screen catalysts

Hartwig’s approach allows chemists to explore as wide a swathe of chemical space as possible. Rather than limit the search to finding new ways to promote a particular transformation, for example, numerous possible transformations are assessed at once. Using a 96 well plate multiple combinations of transition metal catalysts, ligands and reactants are tested simultaneously. Each well contained the same mixture of 17 diverse reactants, which ranged from alkynes and halides to amines, and to each well a unique metal-ligand combination is added.

Much of the power of the process lies in the way mass spec is used to quickly and efficiently sift the large number of complex reaction mixtures for hits. Each of the 17 reactants, all commercially available, were selected to fall within a narrow range of molecular masses. That way, any product formed by the reaction of two or more reactants stands out when analysed by mass spectrometry because of its higher mass.

To assess how well the system works, the reactants, catalysts and ligands were chosen to test whether several known reactions would be ’discovered’ by the process and, sure enough, all were identified. However, the team also identified several new reactions, including a copper-catalysed alkyne hydroamination and two nickel-catalysed hydroarylation reactions. ’We still haven’t finished the experiment - there are other products that we haven’t hunted down and identified yet,’ says Hartwig, who recently moved his research group to Berkeley from the University of Illinois at Urbana-Champaign.

There are many more kinds of reaction that the approach could be used for, Hartwig adds. For example, organocatalysts could be used instead of transition metals. ’We haven’t even used a solvent, we have no oxidants in there, no reductants, no acids, no bases - presumably these would give you an additional set of reactions,’ he says.

’The enormous strength of this approach is that it uses a GCMS - there’s absolutely nothing to stop anybody from doing this to discover new reactions,’ says Matthew Todd, an organic chemist at the University of Sydney in Australia. ’Hartwig has waded into the kind of complexity that most people would shy away from, mixing a huge number of things together - but because of the design of the experiment, you are able to deconvolute that mixture to tease out what is working.’