Prime minister lays out vision for UK science after Brexit 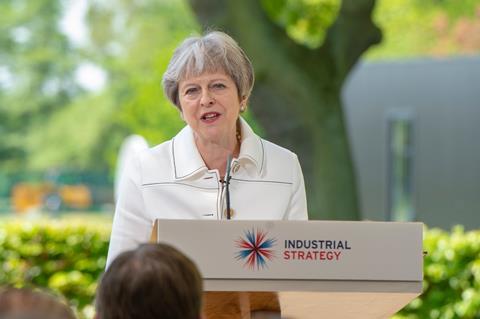 The British prime minister, Theresa May, used her speech at the historic Jodrell Bank observatory to back calls for close scientific collaboration with the EU after Brexit

The UK wants to ‘fully associate’ with Europe’s science and innovation programmes – including the research arm of Euratom, which the government told the EU last year that it would leave. In the first firm commitment on the government’s goals for scientific research cooperation after Brexit, the prime minister, Theresa May, said it was ‘in the mutual interest of the UK and the EU’ to cooperate closely. She added that the UK would ‘willingly pay’ an appropriate financial contribution.

In a speech at the Jodrell Bank observatory in Cheshire, May also insisted ‘we would look to maintain a suitable level of influence, in line with that contribution and the benefits we bring’. Participation in EU programmes including Erasmus+ and Horizon 2020 cost around £2 billion in 2016.

The UK still has the opportunity to shape the successor to Horizon 2020, Horizon Europe, before it loses its MEPs and seat at the European council at the end of March 2019. Jessica Cole, head of policy at the Russell Group, points out that the EU wants to make rapid progress on the programme too before the European parliament elections in May 2019.

The government has been heavily criticised for its decision to leave the entire nuclear cooperation programme of Euratom, which threatens nuclear safeguarding and trade. Also at stake is the UK’s contribution to fusion research through the Joint European Torus (Jet) based in Oxfordshire, for which Euratom provides £52 million a year, and its successor Iter – the world’s largest experimental fusion reactor – being built in France.

It’s now understood that the UK will continue operation of Jet until the end of 2020, alongside the UK’s participation in the current Horizon 2020 research programme. A contract to run Jet in 2019–20 is currently working its way through the European commission and council, according to a spokesman for the Culham Centre for Fusion Energy. He adds that an agreement on association ‘could pave the way for Jet operation to continue beyond 2020, towards the mid-2020s when the Iter machine will start up’.

Five hundred UK scientists and engineers are involved with Jet, and hundreds of jobs in the nuclear industry are dependent on Iter through the £500 million worth of contracts that have been placed with UK companies.

It’s not clear what form full association would take, but the case of Switzerland, which is an ‘associate country’ for Euratom research and training, has been much discussed. It has no other agreements with Euratom, and technical cooperation on nuclear safety takes place outside its framework.

The prime minister also used her speech to stress that the UK ‘will always be open to the brightest and the best researchers to come and make their valued contribution’. She added that the UK’s future ‘must be one in which scientific collaboration and the free exchange of ideas is increased and extended, both between the UK and the European Union and with partners around the world’.

However, her words sit uneasily beside figures obtained by the Campaign for Science and Education (CaSE) that show that between December 2017 and March this year, the government turned down over 6000 visa applications for skilled overseas workers. Three-and-a-half thousand of them were for roles in engineering, science, IT and technology, and medicine, as well as science, technology, engineering and mathematics teaching. These skills are vital to address the ‘grand challenges’ in the government’s industrial strategy, which the prime minister also reiterated in her speech. ‘In the long term, an immigration system for a global Britain that supports research and innovation should not feature a cap on the international specialists we want to attract,’ said CaSE executive director, Sarah Main.

Organisations across business and higher education have been calling for a revision of government immigration policy. President of the Royal Society, Venki Ramakrishnan, said the government needed to ‘ensure that we create an immigration system that promotes the international movement of practicing scientists’. He added that the research community would remain anxious until a deal could be struck on EU science collaboration, but that the prime minister’s speech showed that the government understood what is at stake.