Enzyme-powered engines pack in the power with peroxide munching microjets

Microscopic jet engines powered by an enzyme that makes bubbles of oxygen from hydrogen peroxide fuel have been developed by chemists in Germany. They can zip around in solution up to ten times faster than equivalent engines using platinum catalysts, and could be used to power tiny machines shunting cargoes.

Samuel Sanchez and colleagues from the Leibniz Institute for Solid State and Materials Research in Dresden made tubes from alternating thin layers of titanium and gold that roll up into tubes. 1 They then attached catalase enzymes to the gold interior.

Catalase normally protects cells from the toxic oxidative effects of hydrogen peroxide by converting it to oxygen and water, Sanchez explains, so the catalase inside the microengine tube quickly starts to make bubbles of oxygen, which propel the tube, feeding more H2O2 fuel into the front end. 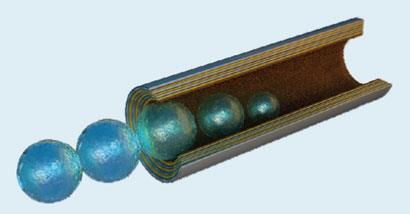 In another paper published in June this year,2 the team made tubes with platinum and iron layers inside rather than gold. The Pt can also convert hydrogen peroxide to oxygen, and the iron layers allow the jets to be steered using a magnetic field and push around objects like polystyrene beads. ’The catalase tubes are much more powerful,’ says Sanchez, ’they go at the same speed with one tenth as much fuel.’ He adds that they have almost managed to combine the two ideas, to make enzyme-powered engines that can be magnetically steered.

Making engines that work at low fuel concentrations is vital for any applications, especially in biological systems, Sanchez points out. ’Up to now people were using 10-15 per cent solutions of peroxide, which is very toxic. Now we can use 1.5 per cent, which is still toxic for some cells but it’s a big step in the right direction.’ He adds that eventually they would like to develop engines that use glucose as fuel, since it is more widely available in biological environments and non-toxic.

Tom Mallouk from Pennsylvania State University, US, thinks that the work is significant for several reasons. He explains that the bubble propulsion mechanism avoids some of the problems that other groups, including the catalytic motor team at Penn State, have encountered in trying to make similar microengines.

’They also touch on an interesting fundamental question of the scaling of motors and propulsion mechanisms,’ adds Mallouk. ’One would not expect bubble propulsion to work well for very small catalytic motors (below 1?m), but clearly at the length scale of 25?m they work quite well using catalase.’