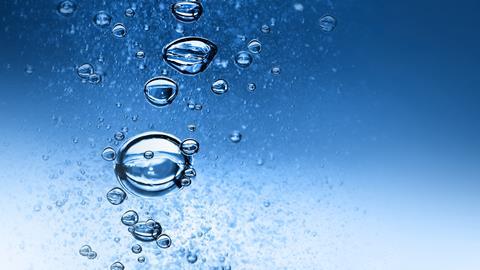 Tiny heated gas-filled bubbles in hydrothermal rocks could have kick-started life’s emergence on prebiotic Earth, research has shown. Simulation experiments suggest that bubbles could enrich prebiotic molecules and enable six essential processes that could eventually give rise to life, adding weight to the idea that conditions at hydrothermal vents were ideal for life to first form.

Mimicking conditions found in porous igneous rocks in hydrothermal settings on early Earth, a team led by Dieter Braun at the Ludwig Maximilian University of Munich, Germany, made a 3D printed microfluidic chamber and partially filled it with water so that air bubbles formed in the unfilled cavities. The chamber was then sandwiched between copper elements on either side, one which heated and one which cooled. This generated a thermal gradient inside the chamber, which, at higher temperatures, caused more bubbles to form spontaneously in the system due to out-gassing. 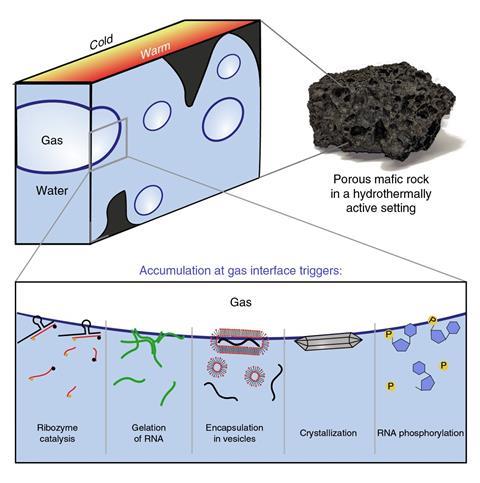 The team then introduced various important prebiotic molecules, including RNA precursors, oligonucleotides and lipids. Experiments revealed that these molecules could gather together in a state of non-equilibrium – a step which is thought to be a prerequisite for life – where the interfaces between the water and moving gas bubbles were constantly fluctuating. This gathering of molecules was caused by continuous cycling of dry and wet conditions. Accumulated molecules already at the interface entered a bubble which dried them. When the bubble moved away the molecules became rehydrated and were dragged along by slower-moving bubbles allowing high concentrations to build up at the interface.

‘It combines useful conditions for the emergence of life in an unexpected and very effective way,’ says Braun. ‘Having wet and dry in one closed chamber, cycling by a temperature gradient between both states is a unique form of non-equilibrium for the first living molecules.’

After just 30 minutes, the team observed six different processes occurring in the system that are relevant to life’s origins and how protocells may have first emerged: enhanced catalytic activity of ribozymes; condensation of RNA into hydrogels; clustering of lipid vesicles that encapsulated short nucleotide chains, division of vesicles, formation of crystals from the RNA precursor ribose aminooxaline, and dehydration-condensation cycles enhancing phosphorylation of nucleotides.

’This is another piece of evidence in favour of life’s origins at hydrothermal vents, which some of us have been saying for a long time,’ comments William Martin, who investigates the origins of life at Heinrich Heine University in Germany. ‘They do not solve the problem of where the monomers come from, but their findings do shift the focus from UV-based chemistry at the Earth’s surface to hydrogen based chemistry in the deep subsurface.’

While the origin of precursor molecules remains a problem to be solved, Braun’s team want to continuing experimenting. ‘Coupling this system with prebiotic chemistry still needs to be explored,’ he says. ‘Next we want to put activated nucleotides in the setting and see [if] it can trigger the replication of the first sequences.’