Delivery of genetic material into cells holds great potential as a weapon against disease. However, a major stumbling block has been developing safe and efficient delivery agents. Previously, gene delivery research has focused on using viral vectors or lipid-based non-viral vectors as delivery vehicles. But using viruses poses the risk of undesirable immune responses, and non-viral agents such as lipid-DNA are not efficient and also known to be toxic to cells.

Now, Eiichi Nakamura and colleagues at the University of Tokyo and other Japanese institutions have successfully delivered enhanced green fluorescent protein genes (EGFP), and insulin 2 genes into mice using a water-soluble cationic tetraamino C60 fullerene. ’This is the first demonstration that not only virus and lipid DNA can act as delivery agents, but that a fullerene can deliver and express DNA in a living animal too,’ says Nakamura. 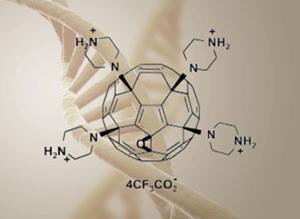 Tetra(piperazino)fullerene epoxide can be used for gene delivery

The attachment of plasmid DNA encoding each gene (in separate experiments) to the tetraamino fullerene vector was made possible via an electrostatic charge caused by the protonation of the amine. The cationic property of the fullerene condenses the plasmid DNA which helps protect the DNA against enzymatic degradation in vivo. Once in the cell, it becomes acylated and loses its charge, thus releasing the DNA.

The team experimented with mice and found that the buckyballs could deliver genes in vivo, and when compared with a lipid-based agent called Lipofectin, noted that the fullerene-based system delivered genes in the liver and spleen more efficiently than the cationic liposome-based system. What’s more, the fullerene appeared to show no significant signs of acute liver or kidney toxicity as seen in Lipofectin, possibly due to the water-solubility of the fullerenes .

’This work opens avenues to test the efficacy of fullerenes for in vivo applications such as insulin gene delivery to reduce blood glucose levels for diabetes treatment,’ suggests Balaji Sitharaman, a bionanotechnology expert at Stony Brook University in New York, US. Nakamura adds that his team’s work offers a viable and easy-to-synthesise alternative to current lipid-based delivery vectors used in gene therapy research.

’Any attempts to develop novel systems that are efficacious are to be applauded,’ says Aliasger Salem who works on gene delivery systems at the University of Iowa in the US. However, he notes that it is not possible to know if fullerenes are superior to viral vectors because a comparison with adenoviruses, commonly used as gene therapy vectors, has not been conducted.

Furthermore, Salem points out that long-term safety concerns for the use of fullerenes still exist. ’Clearance studies, inflammatory responses and the long term expression of gene products still need further evaluation before this system could be considered for any translational applications,’ he comments.