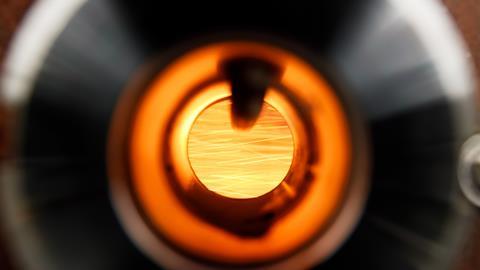 An unlikely sounding technology that is greener than you might think

The need to reduce our reliance on fossil fuels has never been more urgent. Our energy use is responsible for emitting more than 30 billion tonnes of carbon dioxide into the atmosphere each year. With decarbonising the energy sector such an important goal, researchers around the world are searching for new ways to power our lives without destroying the planet.

Hydrogen, fuel cells and batteries are perhaps the most developed and well-known alternative energy carriers today. But there are many other ideas that could also contribute to a cleaner energy economy. One concept that is beginning to attract more interest from the research community is the possibility of using metals as fuels. 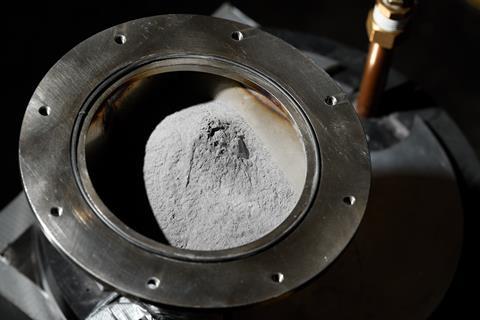 Iron powder can be burned with air to produce heat

Burning metal powders might at first seem an unlikely solution to our environmental woes. But scientists looking for alternative energy carriers believe it could be a green way to power some aspects of our lives.

Most importantly, metal fuels are carbon-free. When you burn an iron nanoparticle, it produces iron oxide. The oxidised material can then be reduced back to iron using renewable electricity, in theory providing a carbon-free cycle.

‘I sometimes think of metal fuels as just being solid hydrogen,’ says Jeff Bergthorson, who heads an alternative fuel laboratory at McGill University in Montreal, Canada. ‘In both cases – if you’re doing it in a green sustainable way – you’re taking renewable energy, and you’re using it to produce an energy carrier or a fuel.’

Bergthorson points out that when hydrogen is produced by electrolysis, its combustion product – water – is reduced to provide a fuel that we can then burn (regenerating water in the process). With metal fuels the same concept applies – in the case of iron, users take iron oxide and recycle it into iron in a byproduct-free cycle that can be repeated over and over again.

Bergthorson says that boron, magnesium, aluminum, silicon, titanium, iron and zinc could be used as fuels that can be burned to produce metallic oxides. Those oxides can then be captured and reduced back into the metal fuel

‘There’s a direct analogue between using aluminium as a fuel and an aluminium–air battery – it’s like the difference between a hydrogen combustion engine and a hydrogen fuel cell,’ adds Bergthorson. ‘Really in all these cases, we’re just talking about a way of storing and transporting energy in a chemical form.’

The ease with which metal fuels can be stored and transported is actually one of their main advantages. ‘Iron can be moved with a shovel – in trucks and ships, it’s very safe,’ notes Bergthorson. ‘It’s very stable … and it’s very cheap to move around compared to things like hydrogen that require expensive and complicated equipment and have safety hazards associated with them.’

This benefit, Bergthorson suggests, could help metal fuels play a major role as clean energy commodities for international energy trade. ‘We trade fossil energy all the time. That’s a normal part of our economy – a huge part of our economy – but trading clean energy, how are we going to do it?’ he asks. ‘The focus right now is typically hydrogen, but can we ship it? … I think people miss the idea that when we ship aluminium around the world, we are shipping energy, right?’

Other key benefits include the abundance of metals like iron and aluminium and their high energy density, packing in a lot of energy by volume compared to most other energy carriers. Scientists have been aware of these useful properties for decades, but its only in the last few years that using metal as a fuel has really started to capture the imagination.

‘Iron is one of the most common elements in the Earth’s crust – there’s a lot of it and it’s really cheap, which is really what you need in an energy carrier that you’re going to use everywhere,’ says Vincent van der Schaft from the student-led metal fuel research group Solid, based at the Eindhoven University of Technology in the Netherlands. ‘And there’s a few other nice properties – an important one is that iron actually burns at a temperature that’s very close to the temperature of a gas flame.’ He explains that this helps to avoid some difficult engineering challenges when retrofitting old installations or industrial processes to run on a new fuel.

Last year a consortium involving Solid oversaw the largest demonstration of metal fuels to date, when their metal-powered system was used to help power a local brewery. The project involved installating an iron burner known as the MP100 at a facility owned by Swinkels Family Brewers.

‘The combustion installation is a really large industrial installation about 15 metres long. And most of the length is covered by a very long burner tube,’ says van der Schaft. He explains that an airflow carries iron powder into the burner, where it combusts. The exothermic reaction generates a lot of energy that is used to heat up water and generate steam, while the iron oxide is filtered out for re-use. The steam is then fed into the brewery to help power the mashing process.

The current burner isn’t large enough to fully power a facility as large as a brewery, but the point of the project was to prove that metal powder can be used in this sort of setting. ‘The MP100 installation that was there has a power output of 100 kilowatts – that’s comparable to a car,’ says van der Schaft. ‘This was more a demonstration to show that in principle you can use this technology in this brewing process.’

Solid had also hoped to premier the world’s first iron-powered ship this year, but concluded that it simply wasn’t feasible with their current burner. ‘The MP100 is not big enough for a brewery or for a ship, so what’s next in that project is scaling up,’ says Ellen Meijerink, who is heading the Solid team this year. ‘We’re working on a new installation right now, which will be 200 kilowatts.’ She explains that Solid and their collaborators have also already started developing plans for another even larger installation.

In the meantime Meijerink says that Solid is also looking into other ways to generate clean energy from metal powders. ‘So we have the same cycle starting with iron powder, but we’re not burning it anymore, we’re adding steam to it,’ she says. ‘This creates an oxide again, but you extract hydrogen from it – so it’s actually creating hydrogen.’

‘Ideally we need [energy carriers] to have a high energy density, high energy efficiency, low [environmental] footprint and the cost to be as low as possible, but the fact is we don’t have such a technology,’ says Wei He, an expert in energy systems based at the University of Warwick, UK.

He notes that battery technology is currently best placed to meet many market needs, and in particular outperforms metal fuels on round-trip efficiency – a measure of the proportion of electrical energy that can be recovered from an energy carrier relative to the electrical energy originally stored in it. While lithium-ion batteries can reach up to 95% round-trip efficiency, metal fuels are limited to around 40%. This is because only around half of the energy stored in a metal fuel can be converted to on-demand power when they are burned, similar to the level of energy harnessed when we burn fossil fuels.

However, given metal fuels’ high energy density – around 10 times that of lithium batteries – and long-term stability, He believes metal fuels could play a complementary role in certain circumstances. He points out that as renewable energy sources like wind and solar provide more of our electricity, the requirements of our energy infrastructure will change. Metal fuels could offer a way to store clean energy at multiple locations to help take the strain when local energy sources produce less output – for example during periods of low wind or high cloud cover. ‘When we further decarbonise the power system, the need for such an energy storage technology will definitely be higher than it is now,’ he says.

He explains that, in an ideal world, powerful electricity transmission systems could distribute electricity over long distances from locations where renewable energy is produced. But the cost of such systems will be vast and there will always be some locations with less access to clean energy. ‘That’s why a second or alternative transmission system will be very valuable, because we already have our roads, our infrastructure, available,’ says He. ‘If we can use that existing infrastructure to transport some energy it can be complimentary to our electricity transmission system. That could be a very low-cost solution.’

However, He notes that despite metal fuels ‘unique advantages’, the chances of them being used commercially will depend on how much investment they attract, and how many people get involved in developing what is still a very early-stage technology.

With his group leading the push for metal fuels, Bergthorson is particularly interested in exploring the fundamentals of how metal particles burn. ‘In terms of research questions, we have many. How fast can you burn metals? That speed is critical in terms of how you can stabilise them in a power plant,’ he explains. ‘What are the combustion products? What do they look like? How does it depend on the conditions in which you burn them? What is the structure of the flames? How do they work?’

Bergthorson’s team has collaborated with colleagues from Eindhoven, as well as Airbus and the European Space Agency on a project called perwaves, in which metal particles are burned in microgravity conditions on board suborbital flights.

The goal is to keep recycling them indefinitely

‘You can make a suspension of iron particles that sit motionless in an oxidising gas. And then we use xenon as the inert gas, which is heavy and has a very low thermal diffusivity to slow down the heat transfer,’ says Bergthorson. ‘As the flame propagates through those iron particles, it has very different types of behaviour from what we’re used to with hydrocarbon fuels – the physics is totally different. And we’re just starting to be able to study that and try to understand how it affects those flame properties that might be interesting for practical applications.’

With more research the hope is that the energy efficiency of metal fuels will increase, and the losses involved in collecting and regenerating the fuel can be minimised. Some might still question whether metal fuels can really be considered a sustainable answer to the energy problem – after all, metals still need to be dug out of the ground. But Bergthorson points out that any alternative energy system will involve new infrastructure and material costs.

Perwaves, or percolating reaction-diffusion waves, set metal powder on fire to study how it burns in a chamber. This is done in weightless conditions because the powder clumps under gravity. In weightlessness, the metal powder can be evenly spaced and suspended, making it easier to study

‘In the initial times of growing the metal fuel stock, there would be some additional mining required. But of course, the goal is to keep recycling them indefinitely,’ says Bergthorson. ‘Instead of using them once like we use fossil fuels, here we’re talking about cycling them through 1000, 10,000, 1,000,000 times.’ For Bergthorson, this is the key to the concept, which he argues represents ‘the most-promising zero-carbon energy carriers proposed to date’. ‘You’re just using the same iron over and over again, charging it in one place and discharging it somewhere else.’