A way to identify individual butterflies from the same species has been designed by scientists in Hungary, who say that the technique could be used to analyse delicate museum samples without destroying them.

Butterfly wings are made up of chitin scales. Melanin in the scales produces black, brown and red hues, but the iridescent blues and greens are generated by light and air travelling through the chitin. The way the scales are arranged dictates which colour is seen. Scientists are interested in studying the wings’ make up and properties to replicate the process, which could inspire the design of new artificial textiles and, as the wings are biodegradable, environmentally friendly colourants. 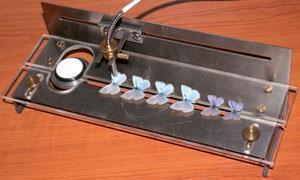 Methods used to study butterflies often require museum specimens to be destroyed or damaged as wings need to be removed and invasive tests carried out. Now, L?szl? Bir? at the Research Institute for Technical Physics and Materials Science and colleagues have developed an instrument that allows reflectance spectroscopy to be carried out on specimens without physically damaging them. They placed their specimens on a setting board similar to one used to study insects and adapted it to allow a light source and probe to move over the wings to take readings.

They sampled 110 butterflies and found that the resulting spectra displayed patterns that could be used to identify individuals. ’This is the first paper that clearly demonstrates that the colours of the blue Lycaenid butterflies investigated work as signals making it possible to recognise conspecific individuals,’ says L?szl?.

Tongxiang Fan, an expert in natural materials at the Shanghai Jiaotong University in China says: ’the spectral identification method presented in this work is non-destructive and of high accuracy, making investigation of rare and precious museum specimens much more feasible.’

In the future, the team hopes to reproduce the natural structures to understand how they give rise to the butterflies’ colour.