C50 breaks all the rules

Are we any closer to a 3D analogue of benzene?

European scientists have found that the rules of aromaticity need to be rewritten if they are to ever discover a superaromatic fullerene.1 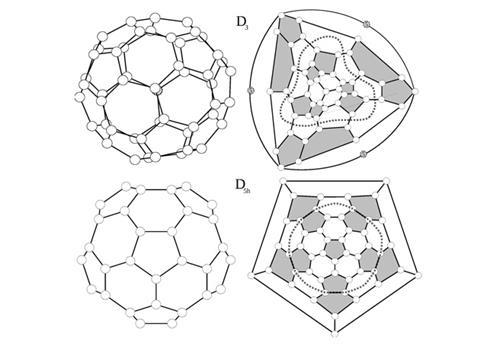 The two most stable isomers of C50

When buckminsterfullerene first stunned chemists with its remarkable structure, it was welcomed as a 3D analogue of benzene – a superaromat, hosting perfect spherical aromaticity. Disappointingly, despite being largely composed of benzene-like hexagonal units, the overall structure of C60 was eventually revealed to be anti-aromatic. Its stability was instead chalked up to a relief in overall strain, thanks to each pentagon being isolated amid a sea of hexagons. Following in C60’s footsteps, a number of other fullerenes were soon discovered, each failing to live up to the hope of superaromaticity.

Hoping they’d have better luck in uncovering a superaromat, Arnout Ceulemans and Ana Sanz Matías from the University of Leuven, Belgium, and their co-workers, took a closer look at the structure of C50, a cage responsible for one of the most prominent peaks in the mass spectrum of carbon soot. Indeed, C50 meets Andreas Hirsch’s magic electron count rule of 2(N + 1)2,2 which, alongside requirements that the electronic structure should consist of completely filled spherical shells and the overall cage shape should be close to a hollow sphere, identifies fullerenes that should behave as superaromats.

Lacking experimental confirmation of the cage’s structure, the group used their computational tool box to investigate the most stable isomers of C50. In the face of obeying all the established prerequisites, they found that this magic number cage does not exhibit complete aromaticity. Surprisingly, thanks to the cage possessing aspects of 3D aromaticity, the team discovered the first example of a neutral fullerene where the most stable structure isn’t the one housing the fewest adjacent pentagon pairs.

‘I think this result will change the way chemists approach the study of the molecular structure and reactivity of fullerenes,’ comments Miquel Solà, a physical chemist from University of Girona, Spain, ‘From now onwards, aromaticity cannot be overlooked.’

Ceulemans is convinced that it’s still all to play for: ‘One should continue to look for other types of cages that could really exemplify perfect 3D aromaticity. I think that a superaromat exists, and someone should find it.’