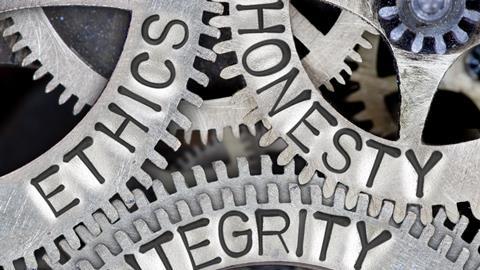 Call for quicker progress on research integrity at UK universities

Six years on from making commitments on research integrity, a quarter of UK universities still aren’t completely transparent when it comes to misconduct investigations, and there are no meaningful consequences of that failure.

While all the most research intensive universities are complying with the key recommendations of a 2012 research integrity concordat, by upholding principles of honesty, rigour, transparency and open communication, a report from the House of Commons science and technology committee says there’s still room for improvement. The fact that a quarter of universities are failing to meet the basic commitment of publishing an annual research integrity report risks ‘giving the impression of pockets of complacency’. It adds that more leadership is required to drive implementation of the concordat across the whole of the research sector.

The report states that the UK’s enviable record of research excellence shouldn’t be taken for granted as ‘there is a need for the research community – including funders, publishers and employers of researchers – to stay ahead on research integrity issues and how they are dealt with in public policy’. The committee chair, Norman Lamb, says: ‘We need an approach to transparency which recognises that error, poor uses of statistics and even fraud are possible in any human endeavour, and a clear demonstration that universities look for problems and tackle them when they arise.’

Better data is needed. What data is available suggests serious research misconduct is rare, but the committee points to a mismatch between the number of investigations and the scale of reported temptations to compromise on research standards – as revealed by surveys of researchers. There are also concerns over reproducibility, increasing rates of journal article retractions and a rise in the deliberate manipulation of images in research papers. The report acknowledges that some of these trends could be due to better detection or the correction of ‘honest errors’, but it is concerned that few formal investigations are undertaken by universities. Twenty universities told the committee they had not undertaken any investigations since the concordat was signed. The report argues that ‘increases in the number of investigations should be seen as a healthy sign of more active self-regulation’.

While researchers strongly resist the idea of external regulation, the committee says confidence in the existing system of self-regulation needs to be improved. It recommends that while employers should still have the first responsibility to investigate allegations of misconduct, the government should establish a national research integrity committee to independently verify whether appropriate processes have been followed by the research institution. Similar mechanisms operate in other countries such as Australia and Canada.

Malcolm Macleod, a clinical neuroscientist at the University of Edinburgh has worked on improving the integrity of biomedical research. He suggests focusing on rooting out the wrong doers is a missed opportunity. ‘What funders haven’t paid attention to is various questionable practices that give investigators the flexibility in analysis to overstate findings,’ he adds. ‘Nobody has a magic wand to make every researcher the perfect researcher, but how do we help each one get a little bit better?’ Addressing that question, he suggests, ‘would have a much more profound effect overall on both value for money and waste in research’.

Compliance with the concordat has been a condition of receiving public funding since 2013, but sanctions have never been applied and funders don’t collect comprehensive information on adherence to it. The committee heard that where non-compliance was identified funding bodies preferred ‘carrots’ to ‘sticks’. The committee wants to see the signatories – which include Universities UK and funding bodies – strengthen the concordat by making requirements and expectations clearer, and to produce a road map for total compliance with the improved version within the next year. The science and technology committee is particularly keen to see improvements in research integrity training, processes for responding to allegations of misconduct, commitment to clinical trials transparency and publication of negative research results. Moreover, it recommends that the nation’s new overarching funding body, UK Research and Innovation (UKRI), should collect and publish details of all universities that don’t comply with the concordat.

The report also calls for UKRI to assess whether there is suitable training on research integrity and whether provision should be centralised, and how best to improve the statistical competency of researchers. The committee heard evidence that researchers need better statistical training, with many using statistics ‘without fully understanding what they’re doing’.

Macleod points out that as researchers look for funding across national borders, ‘it’s not just a UK problem with a UK solution’. A bottom-up practical approach such as a research equivalent of the US-based Institute for Healthcare Improvement – globally funded to provide a context for research improvement activities, tools and bench marking – was ‘much more likely to bear fruit’.

A spokesman for UUK said: ‘The report recognises that the vast majority of research undertaken in the UK is of high quality and high integrity. So this is about providing assurance to stakeholders that, in the rare instances where standards are not met, universities are taking appropriate action.’ UUK says it will meet with all signatories to make sure the concordat commitments are sufficiently clear, and to take any necessary action on the committee’s recommendations.