Cancer cells rely on the heat shock protein Hsp90, but healthy cells need it as well.

Cancer cells rely on the heat shock protein Hsp90, but healthy cells need it as well. Surprisingly, an Hsp90 inhibitor has been found that hits tumours with high specificity. Michael Gross investigates.

Molecular chaperones are proteins that protect other proteins from unwanted interactions and thus help them to refold properly, or at least stop them from misfolding into aggregates. Throughout the 1990s, chaperone research has been a major focus in biochemistry, with many systems being investigated in great structural and functional detail. The heat shock protein Hsp90 emerged from this research as a somewhat special chaperone, mainly due to the nature of its client proteins. While the customer list of the classical chaperone GroEL (Hsp60) seems to depend largely on size (very small proteins can help themselves, very large ones don’t fit inside the GroEL barrel structure), Hsp90 turned out to be a kind of first-class chaperone reserved for some of the most important movers and shakers in the cell.

In particular, this chaperone keeps some of the regulatory elements of the cell in shape, including transcription factors and hormone receptors. This suggests that removal of Hsp90 may result in knock-on effects throughout the complex regulatory networks of the cell. Working first with the fruit fly Drosophila, and later with the plant Arabidopsis, Susan Lindquist’s group at the University of Chicago has shown that this unique function of Hsp90 as a ’meta-regulator’ links environmental stress to development and evolutionary change.

During the normal life of the fly (or plant), Hsp90 seems to ’buffer’ a certain amount of genetic variability in the regulatory systems by chaperoning those mutated proteins that are not quite stable enough to bind their targets unaided. If and when the chaperone is either called off to serve an acute heat shock response, or removed by genetic manipulation or chemical inhibition, spectacular malformations turn up in the next generation of flies. In evolutionary terms, this sudden release of ’stored’ genetic variability increases the chances that the species can adapt to a sudden change of environmental conditions.

Several recent studies suggest that human cancer cells, too, are very sensitive to inhibition of Hsp90. Bearing in mind the malformations seen in Drosophila, researchers had only a faint hope that this finding might be useful for cancer treatment. They feared that any drugs inhibiting a chaperone that influences so many crucial processes in the healthy cell would be highly toxic. Preclinical tests, however, have shown that the Hsp90 inhibitor 17-allylaminogeldanamycin (17-AAG, a derivative of the naturally occurring antibiotic geldanamycin) is amazingly non-toxic to normal cells, even though it is highly active against tumours. If both kinds of cells depend on Hsp90 function, how can this paradox be explained?

Researchers at Conforma Therapeutics have now presented a solution to this enigma. Studying the chaperone-inhibitor system in vitro, and with cell cultures derived from different kinds of cancers, they show that the inhibitor’s affinity to Hsp90 in tumour cells is two orders of magnitude stronger (low nanomolar range) than it is for the same protein in healthy cells or in highly purified form. Using immunoprecipitation to test the extent to which the Hsp90 is complexed with its cochaperones p23 and Hop, the researchers found the crucial difference: in the tumour cell, virtually all of the Hsp90 population is present in the form of the multichaperone complexes that it typically assembles when it is active. In normal cells, by contrast, most of it is merely ’on call’, as the uncomplexed monomer.

Additional investigation of ATPase activity ( ie ’fuel consumption’) of the chaperone confirmed this difference: in cancer cells the chaperone is busy, while in normal cells most of its molecules are idle, as long as there is no significant stress. The heavy workload of Hsp90 in tumours seems plausible, considering that its client list includes a number of well-known cancer targets, such as the notorious p53. This finding also explains why Hsp90 is often found to be produced in higher copy number in late stage tumours. In the early stages of cancer, however, the total abundance of the chaperone appears to be the same as in normal cells. 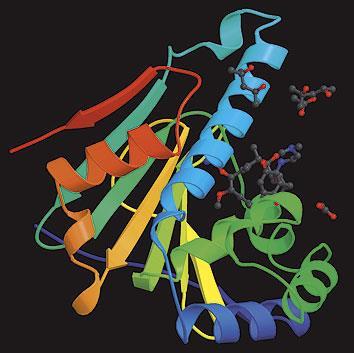 In the absence of any high resolution structures of the multichaperone complex, we cannot know why it binds to the inhibitor so much more avidly than Hsp90 does on its own. Recent crystal structures of a human Hsp90 fragment liganded with similar inhibitors ( above) suggest that geldanamycin must undergo a cis-trans isomerisation in order to bind to the free chaperone. Conceivably, the cochaperones in the complex might alter the structure of Hsp90 and/or geldanamycin in a way that lowers this energy barrier. But no matter what mechanistic reason lies behind it, the 100-fold increased sensitivity to inhibition in tumours makes Hsp90 a promising target for new cancer drugs.

Michael Gross is a science writer in residence at the school of crystallography, Birkbeck College, London. He can be contacted via the prose and passion web page.