Carbon can't but tin can

US chemists have discovered that distannynes - tin-based analogues of acetylenes - can react reversibly with ethene to make cyclic complexes. Such reactions are usually forbidden to carbon-based molecules and irreversible with other members of group 14. The reversibility of the reaction suggests that these molecules might develop into a new breed of catalysts.

As we move down the periodic table away from carbon, explains Philip Power from the University of California, Davis, the character of the molecular orbitals available for reaction changes considerably. Looking at the chemical formulae, distannynes that have a triple bond between two tin atoms might appear very similar to acetylenes, but in fact their bonding is quite different, which explains why the distannynes are bent compared to their perfectly linear acetylene cousins and why they react so differently. 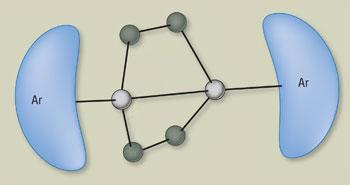 Two molecules of ethene add to the tin-tin triple bond

When the group put solutions of one of their distannyne compounds under 1 atmosphere of ethene at room temperature, a new complex formed within just one minute. Two molecules of ethene added to each distannyne molecule to give a complex with two four-membered rings in the shape of a butterfly’s wings, each involving the two tin atoms of the distannyne and two carbon atoms of the added ethenes. Reducing the pressure slightly allowed the ethane molecules to be liberated, regenerating the distannyne.

Power admits that he was quite surprised by the reversibility of the reaction: ’The very fact that the reaction goes at all and is reversible is a big testament to the differences as you go down [the group],’ he says. Equivalent germanium complexes have been shown to be stable up to 200?C, but Power is quick to point out that relatively few such compounds have ever been made, so it may be possible to modify the molecules to make complexation more or less easily reversible.

Larry Sita from the University of Maryland, US, describes the discovery as a new ’benchmark reaction’ that will prompt a re-evaluation of some of the fundamental chemistry of group 14 compounds. ’Extrapolating the rules of organic chemistry to the heavier members of the group is a bit of a stretch -silicon appears to behave similarly [to carbon], but for germanium and tin the strength of our convictions weakens,’ says Sita. ’This could help begin the formulation of new predictive rules for the heavier elements.’

The reversibility of the ethylene binding opens up an exciting prospect for Power - that the complexes may be useful as catalysts. ’Hydrogenation would be a simple example,’ he says, ’if you could coordinate ethylene and then add hydrogen to generate ethane.’ This would probably require ethylene to react with some kind of tin hydride species, which Power thinks could be possible in the near future - ’We’re working on it,’ he quips.