UK researchers have developed a new system that combines two polymerisation reactions to produce a block copolymer whilst recycling waste carbon dioxide from one reaction into the other, all using a single catalyst.

Aliphatic polyesters and polycarbonates are gaining attention as possible substitutes for petroleum-derived plastics. Biological and chemical transformations can produce their monomers from biomass, and it’s possible to combine these monomers to give diverse polymers with versatile physical characteristics. One example is poly(l-lactide-b-cyclohexene carbonate) (PLA-b-PCHC). This combination of polylactide and polycyclohexene has already demonstrated enhanced thermal and mechanical properties but has so far only been produced by sequential addition methods or tandem catalysis. 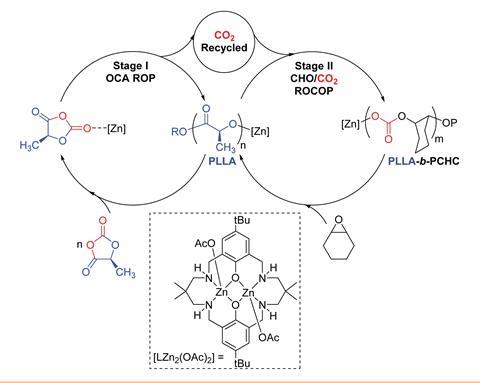 Now, a team of scientists supported by the UK Catalysis Hub has used a di-zinc catalyst in a two-cycle process to build PLA-b-PCHC. In one cycle, the catalyst drives a controlled ring-opening polymerisation of L-lactide-O-carboxyanhydride to make a polylactide. This polylactide, along with carbon dioxide liberated from the first polymerisation is then incorporated in a concurrent polymerisation reaction that produces PLA-b-PCHC. As well as the simplicity of a one-pot procedure, a real advantage of this method is that the catalyst recycles 91% of the carbon dioxide released as a byproduct on one side of the cycle.

‘The key to making this carbon dioxide recycling process work was the ability to use catalysts previously developed in our group that can copolymerise at low carbon dioxide pressures,’ explains team member Charlotte Williams from the University of Oxford, UK.

Carl Redshaw, an inorganic materials chemist at the University of Hull, UK, describes the work as an elegant way of using and recycling carbon dioxide. ‘It’s a timely study given the need to deal with the current carbon dioxide pollution issues, and the demand for new polymers with desirable features.’

Williams adds that work is ongoing to explore in detail the kinetics and mechanisms by which these recycling switches work. ‘We are intrigued to understand the range of other possible monomers and processes, which may work equivalently.’