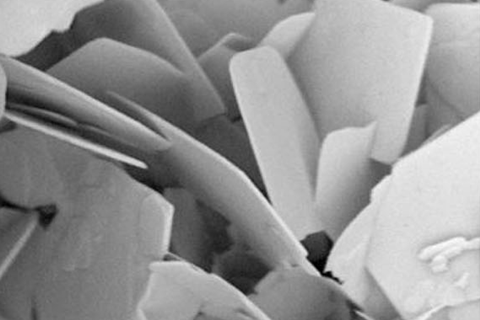 A new catalyst harnesses the energy associated with daily temperature changes, and uses it to convert carbon dioxide into methanol. The technique could one day be used to supply sustainable fuel.

Researchers in China have developed a catalyst that generates an electric current in response to temperature variation and then uses this to drive the conversion of carbon dioxide to methanol. The pyroelectric process relies on bismuth tungstate nanoplates that harvest heat energy during temperature changes – potentially offering a way to power fuel production using only the natural thermal changes during day and night cycles.

Soochow University’s Guifu Zou, who led the project, explains that while we are all familiar with daily temperature changes, most of this energy is wasted. His team wanted to find a way to transform this lost resource into usable energy. ‘In this work, our demonstration is to use pyroelectric materials to capture energy from temperature variation and to convert it into chemical energy,’ he says.

The pyroelectric catalyst that Zou’s team uses has a natural, built-in electric field. Changes in temperature cause the ions within the crystalline material to move slightly, altering its electrical polarisation and producing a current.

‘The spontaneous polarisation of pyroelectric materials decreases with the increase of temperature,’ explains Zou. ‘Once the temperature of the pyroelectric material changes, the balance between spontaneous polarisation and bound charge is broken. To rebuild the balance, free charges are generated. The cooling process is similar.’

While pyroelectric catalysts have previously been used in water-splitting reactions, this is the first time that they have been applied to carbon dioxide reduction. Operating at atmospheric pressure, the bismuth tungstate nanomaterial could generate methanol over 20 thermal cycles with temperatures varying between 15°C and 70°C.

While these systems are still at a very early stage, Zou’s team notes that, in theory, pyroelectric devices could achieve energy conversions as high as 92% – far higher than the around 20% efficiencies typically seen with much more developed photovoltaic technologies.

‘[This work] demonstrates an important step towards development of pyroelectric platforms for catalytic reduction of CO2 to methanol,’ comments Hamideh Khanbareh, an expert in pyroelectric materials based at the University of Bath, UK, who was not involved in the project. ‘Bismuth tungstate nanoplatelets with a layered perovskite structure providing a high surface area and a high photoelectric and pyroelectric activity are shown to be well suited for converting the abundantly available low-grade waste heat into electrochemical energy.’ With the growing demand for sustainable energy, Khanbareh says these findings will motivate further research into using pyro-electrochemical fuel cells to make an even wider range of chemical feedstocks and fuels.

Zou’s team will now focus on searching for new pyroelectric materials to improve the efficiency of the process. ‘On the other hand, the synergy of photocatalysis and pyroelectric catalysis might provide an avenue to achieve efficient CO2 reduction,’ he adds.