Next generation of high-capacity rechargeable batteries comes one step closer

Chemists in Canada have used a carbon framework to form an electrode in lithium-sulfur batteries that results in charge capacities several times greater than standard lithium ion batteries.

The researchers say that the electrode, which is based on a framework of ordered carbon rods and fibres, behaves like a ’mini electrochemical reaction chamber.’

Lithium-sulfur batteries can potentially have capacities five times higher than the lithium-ion batteries presently used in consumer electronics. Like lithium-ion batteries, they use the flow of lithium ions in an electrolyte between two electrodes, an anode and a cathode. When the battery is powering a circuit, positive lithium ions generate a current by flowing from within the anode, through the electrolyte and into the cathode. Conversely, when the batteries are being charged, the polarity of the electrodes switches, and the lithium ions are forced to flow back into the anode, ready for another discharge cycle.

Lithium-sulfur batteries differ from lithium-ion batteries in the way they store the ions. In lithium-ion batteries the ions are squeezed between molecules in the electrodes, a process known as intercalation. In lithium-sulfur batteries, however, the ions are taken in by a simple redox reaction with sulfur. Unlike intercalation this reaction is not limited by the electrode structure, which is why in theory the batteries can have a higher capacity for the same volume.

Still, there are problems in realising the devices. Sulfur is both electrically and ionically insulating, so for the electrodes to work the sulfur must always be in close contact with a conductor. Moreover, ’polysulfide’ ions, which are intermediates in the redox reaction, are so soluble they can leak out of the electrodes and into the electrolyte, thereby reducing the electrodes’ active mass.

Linda Nazar and colleagues at the University of Waterloo say they have got around these problems with a cathode formed on a conductive carbon framework. They begin by separating a number of thick, porous carbon nanorods, 6-7nm in diameter, with several thin carbon microfibres. Then they fill the structure with molten sulfur, which shrinks upon solidifying to leave porous channels into which an electrolyte can eventually flow. In the final step they apply a polymer coating, which helps prevent polysulphide ions from escaping. 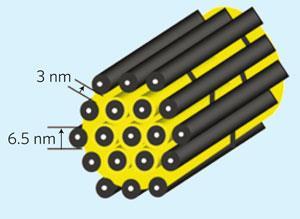 A schematic diagram of the sulfur (yellow) confined in the interconnected pore structure of mesoporous carbon, formed from carbon tubes propped apart by carbon nanofibres

In tests on simple cells, the Waterloo group found their cathode could retain capacities of 1320mAhg-1 - nearly 80 per cent of the theoretical capacity, and some three times that of the electrodes used in lithium-ion batteries. ’The carbon framework not only acts as an electronic conduit to the active [sulfur] mass contained within, but also serves as a mini-electrochemical reaction chamber,’ they say. ’This entrapment ensures a more complete redox process takes place.’

Vasant Kumar, a chemist at the University of Cambridge who specialises in lithium batteries, thinks the work by Nazar and colleagues ’adds a new dimension’ in increasing sulfur utilisation within a micro-structured cathode. However, he says there are still open questions, such as whether the assembly can be reproduced readily or whether there will be variations from one assembly to another. ’The authors have presented a plausible model, but need more evidence to be convincing,’ he adds. ’Nevertheless the results are interesting and one of the highest reported capacities is given over many cycles.’