Researchers in the US claim to have created electrodes from carbon nanotubes that can make lithium-ion batteries some ten times more powerful than conventional models. Such batteries, they say, could one day be used for power-hungry applications, such as hybrid vehicles and renewable energy sources.

One challenge in the field of energy storage is to create devices that combine the high capacity of batteries with the high power delivery of capacitors. If batteries are the starting point, the trick is to improve the speed at which ions flow into electrodes. During the discharge of a battery, ions flow from within the anode to the electrolyte and into the cathode, thereby generating the current - so speeding this process up is key to creating high power delivery.

In the past, researchers have improved the speed of ion flow in lithium-ion batteries by employing nano-structured electrodes. However, the power delivery of these has still been less than capacitors.

Now, Yang Shao-Horn and colleagues of the Massachusetts Institute of Technology have created electrodes made of multiwalled carbon nanotubes that could be the first to bridge the gap between capacitors and batteries. Carbon nanotubes have very high electronic conductivities to help charge flow, and their long, thin dimensions mean they can form porous electrodes, which provide fast transport for lithium ions.

The researchers make their new electrodes with a novel layer-by-layer technique, which allows them to have high control of electrode thickness and other properties. It involves dipping a substrate alternately into solutions of positively and negatively charged carbon nanotubes, so that they self-assemble onto the surface without the help of any binding compounds. 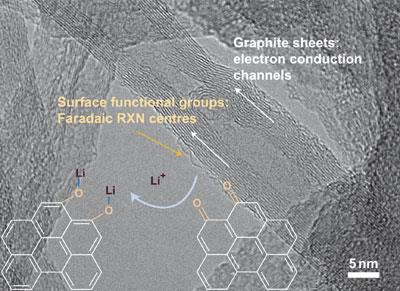 To test the electrode, Shao-Horn and colleagues incorporated it as the positive electrode in a conventional battery assembly, with either lithium metal or lithium titanium-oxide functioning as the negative electrode. They found that the battery could store five times the energy of a normal capacitor, and could deliver ten times the power of a lithium-ion battery with standard electrodes. Moreover, they found the energy capacity did not fade over more than a thousand recharge and discharge cycles.

Bruno Scrosati, an expert in lithium-ion batteries at the University of Rome ’La Sapienza’, thinks the work is interesting but not a breakthrough. He says the cell functions more like a supercapacitor than a battery because the energy-producing reactions seem to take place at the electrode surfaces. ’Therefore it’s not particularly surprising that it can provide a power delivery higher than that offered by a conventional lithium battery, which is generally designed for providing a high energy density,’ he adds.

Vasant Kumar, a scientist at the University of Cambridge, UK, who also works on lithium-ion batteries, also thinks the cell behaves like a supercapacitor. But he notes it is ’astonishing’ that, for a supercapacitor, it exhibits such a high energy capacity. ’This paper shows that with scaling down of the electrode structures, supercapacitors and batteries can overlap into each other,’ he says.