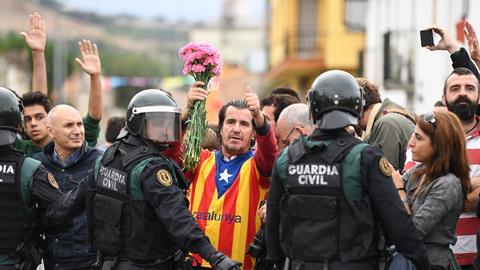 The Spanish government’s heavy-handed response to the Catalan independence vote, held on 1 October and dismissed as illegal and unconstitutional, has had a knock-on effect on universities and research centres across the region. These research institutions are among 300 regional entities that have seen their financial independence curtailed, as the Spanish tax ministry seized control of regional accounts.

On 19 September, the central government issued an order to take control of all of Catalan’s regional government finances, in an attempt to hinder preparations for the vote. The order, signed by tax minister Cristóbal Montoro, aimed to ‘guarantee public services in the general interest […] and compliance with the law and the constitution’. The government’s aim was to stop public funds being spent on the referendum, although the order doesn’t mention this specifically.

We know that some items are not being paid, such as some subscriptions to scientific journals

Across the north-eastern region, research centres and universities have reported that most card payments have been refused. The directors of these institutions must now go through a bureaucratic process to get expenses for their institution approved, before their banks can get permission from the tax office to process it. This can take up to a week and needs a declaration signed by the centre’s management, assuring the ministry that the funds won’t be used for ‘any activities that are illegal or contrary to the mandate of the courts of law’.

Lluis Rovira, director of Cerca (the network of Catalan research centres), confirmed that the freeze on bank accounts and credit cards are still in place, even though the referendum has been and gone. According to the ruling, the order will only be lifted when the ‘situation of risk for the general interest disappears in […] Catalonia’. Rovira denounces the tax ministry for its poor communication and says that the order was applied ‘overnight’. He points out that institutions have still managed to pay workers’ wages though.

A spokeswoman for the Spanish tax ministry said that the measure may stay in place indefinitely, and that, at the moment, there’s no date set for lifting it. She added that the new processes are working well and payments are generally being approved. The ministry’s representative couldn’t confirm whether any payments made by scientific research institutions had been denied

Both Rovira and Lluis Solá, manager of the Institute of Chemical Research of Catalonia (ICIQ), say that they haven’t had any direct communication with the tax ministry. They only heard about the order from their respective banks.

However, several centres and the Cerca network have reported that corporate credit card payments have been suspended. ‘We know that some items are not being paid, such as some subscriptions to scientific journals,’ says Rovira. He adds that no one seems to know the criteria being used by the tax office that allows some payments to be made while other are denied. ‘Why can I use the card to pay for a road toll, but not for a taxi ride?’ he asks.

Solá says that ICIQ’s accounts are still blocked. He notes that, to date, no expenses have been refused, but that they haven’t received any response about lifting the block on one of their cards. ‘We could supposedly unblock it through a declaration of responsibility, but we haven’t heard anything from the ministry,’ says Solá.

Rovira condemns this government interference as illegal, pointing out that the accounts seized don’t just hold taxpayers’ money. ‘A large portion of the funds in those bank accounts comes from the European Union and the private sector,’ he says.

The tax ministry spokeswoman said that European funds could be used, but couldn’t specify if that was the case if the funds were in a bank account that also held funds from the central government.